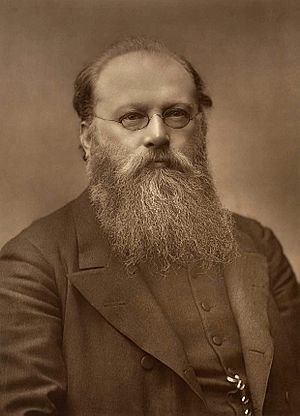 Richter came from a musical family and studied violin, horn and music theory at the Vienna Conservatory. He became famous for his conducting of the music of Richard Wagner, Anton Bruckner and Johannes Brahms.

Richter helped Wagner to prepare the printed musical scores of Die Meistersinger von Nürnberg and the four operas in the cycle Der Ring des Nibelungen. He conducted a lot in Vienna and at the Bayreuth Opera House which Wagner had built for the performance of his own operas.

Later he became very popular in England and lived in Manchester. He was conductor of the Hallé Orchestra and director of the Birmingham Music Festival. He conducted German operas at Covent Garden and in 1909 he conducted Wagner’s Ring cycle which was being performed in English for the first time.

When he retired he lived in Bayreuth until his death.

Richter helped the English audiences to get to know the music of Wagner, Dvořák and Elgar. Elgar dedicated his First Symphony to Hans Richter, describing him as a “true artist and true friend”.

All content from Kiddle encyclopedia articles (including the article images and facts) can be freely used under Attribution-ShareAlike license, unless stated otherwise. Cite this article:
Hans Richter Facts for Kids. Kiddle Encyclopedia.