The Hallé facts for kids

The Hallé is an orchestra based in Manchester, England. It is the UK's oldest symphony orchestra and the fourth oldest in the world. Since 1996 its home is in the Bridgewater Hall, Manchester. 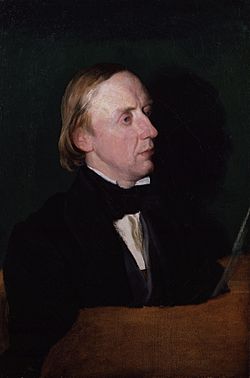 The conductor Sir Charles Hallé who started the orchestra

One of the most famous conductors the orchestra had was Hans Richter who was music director from 1899 to 1911. During this time the orchestra gave the first performance of Symphony No. 1 by Sir Edward Elgar.

The orchestra suffered during the economic crisis of the 1930s and when World War II started. At that time it was sharing many of its players with the BBC. There were only 30 players left. A new conductor was appointed in 1943: John Barbirolli. He was the musical director for 27 years. During this time the orchestra rose to international fame.

Kent Nagano was principal conductor of the orchestra from 1992 to 1999. The orchestra moved from the Free Trade Hall to the Bridgewater Hall in 1996. Nagano was criticized for putting on concerts that cost a lot of money, and charging high fees for himself. The orchestra started to be in financial problems and nearly went bankrupt. Then changes were made and the orchestra were more secure financially.

In September 2000, Mark Elder took over as musical director. He has made the orchestra into an excellent orchestra again.

The Hallé also has a choir which was started in 1858 by Sir Charles Hallé. They give about twenty concerts a year. Their conductor is James Burton who also conducts the Hallé Youth Choir. There is a Hallé Youth Orchestra which is conducted by Ewa Strusinska. There is now also a Hallé Children’s Choir, conducted by Shirley Court. The Hallé also have their own CD label since 2008.

All content from Kiddle encyclopedia articles (including the article images and facts) can be freely used under Attribution-ShareAlike license, unless stated otherwise. Cite this article:
The Hallé Facts for Kids. Kiddle Encyclopedia.