Ancoats is an inner city area of Manchester, North West England, next to the Northern Quarter and the northern part of Manchester city centre.

Historically in Lancashire, Ancoats became a cradle of the Industrial Revolution and has been called "the world's first industrial suburb". For many years, from the late 18th century onwards, Ancoats was a thriving industrial district. The area suffered accelerating economic decline from the 1930s and depopulation in the years after the Second World War, particularly during the slum clearances of the 1960s.

Since the 1990s Ancoats' industrial heritage has been recognised and its proximity to the city centre has led to investment and substantial regeneration. The southern region of the suburb is branded as New Islington, by UK property developers Urban Splash, while the north retains the Ancoats name, with redevelopment centred on the Daily Express Building.

For the purpose of local government elections the area is part of the Ancoats and Clayton ward of the city of Manchester.

The name Ancoats is likely to have derived from the Old English ana cots, meaning "lonely cottages". The settlement is first recorded as Elnecot in 1212. In a survey of 1320, Ancoats was recorded as one of the eight hamlets within the township of Manchester in the ancient parish of Manchester within the hundred of Salford; the hamlet probably consisted of a few cottages and farmhouses centred on what is now Ancoats Lane, Butler Lane and Newton Lane. During the medieval period, Ancoats Hall was built. Land in Ancoats was bequeathed in the 14th century by Henry de Ancotes. The village covered the area of land that roughly lies between the River Medlock and the River Irk.

For more details, see List of mills in Manchester 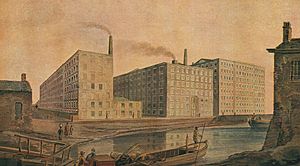 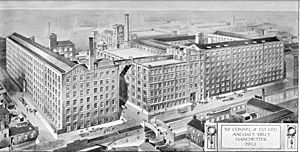 Survey work for the Rochdale Canal was carried out by James Brindley in 1765. The knowledge that its construction would make the transport of raw materials and finished goods more convenient gave industrialists the confidence to build their cotton mills. The first mills were built in Ancoats as early as 1790. In 1792 commissioners were established for the improvement of the township of Manchester, which included Ancoats. Towards the end of the 18th century steam power was first used to power the cotton mills. Some of the earliest mills of this period were Murray's Mills, which were established next to the Rochdale Canal on Union Street (now Redhill Street) off Great Ancoats Street, by Adam and George Murray in 1798. Later, they became known as Ancoats Mills when they were operated by McConnel & Company Ltd. The streets of Ancoats were also laid out during the latter part of the 18th century, with little development taking place other than small houses and shops along Great Ancoats Street and Oldham Road (A62 road).

Ancoats grew rapidly to become an important industrial centre and as a result it also became a densely populated area. By 1815 Ancoats was the most populous district in Manchester. Streets of back-to-back houses and court dwellings were rapidly built. For the poorest members of the community, houses were split and cellars let separately. Public health was a concern; a survey motivated by the fear of a cholera outbreak showed that over half of homes in Ancoats had no private plumbing, and over half of streets were not cleaned.

By the middle of the 19th century Ancoats was densely developed. In 1851 Ancoats' total population was 53,737, larger than towns such as Bury and Blackburn. However, despite this large population, Ancoats lacked public buildings and spaces. There were no parks and the only public buildings were a few churches and a dispensary. As late as 1821 there had been no churches.

Cotton was not the only industry in the locality, as foundries and engineering factories were required to produce the machinery needed by the mills. The largest of these were those operated by the brothers John Muir Hetherington and Thomas Ridley Hetherington, which were established in 1830. Eventually the company became known as John Hetherington and Sons Ltd and the principal factory was at Vulcan Works on Pollard Street. The company was also the proprietor of Curtis, Sons & Company, which was established in 1804 at the Phoenix Works, which were on both sides of Chapel Street (now Chapeltown Street). On one side of the street there was a brass and iron works and on the other side there was a machinery factory. Hetherington's produced a huge range of machinery for the textile industry that included machinery for opening, preparing, spinning and doubling cotton, cotton waste, wool and worsted. Their speciality was a machine called a Combined Opener and Scutcher that was very effective in the cleaning of most types of cotton without damaging the staple or losing serviceable fibre.

Possibly the least known, but vitally important, industry in Ancoats was the manufacture of flint glass. More than 25 glassworks have been identified in Manchester, all built during the 19th century, and many of these were in Ancoats. Thomas Percival and William Yates established one of these on Union Street (now Redhill Street) in 1844. The works was equipped with two furnaces (later three), an annealing house, workshops, a warehouse and offices. In 1852, Thomas Vickers joined the company and William Yates left in 1862. After this, the company became known as Percival Vickers British and Foreign Flint Glass Works. It made a large range of glassware that included tumblers, wine glasses, decanters, vases, celery vases, salts and cake stands. One of the buildings in Ancoats, the Flint Glass Works, still exists today and has been converted into serviced offices.

At the top of Stony Brow (later Junction Street and now Jutland Street) there was the multi-storey drysalters factory of Thomas Hassall. It was said that this was the only drysalters in England and it supplied rock salt, moss litter and all kinds of other things. There were also chemical works (especially alum), floor-cloth works and finishing and calendering works that rolled cloth to smooth or glaze it.

During the 19th century, due to political and economic circumstances, many Italians left Italy for a more secure life. Most of the Italians who arrived in Ancoats were from Liguria, in northwest Italy, and Frosinone and Caserta, southeast of Rome. Over the next hundred years they created what became known as Ancoats Little Italy. Large numbers of Irish also settled in Ancoats. According to the 1851 census almost half of the men living in Ancoats had been born in Ireland.

The Methodists were very active in Ancoats at the end of the 19th century – they ran both a men's workhouse and women's night shelter (with coffee tavern). There were dozens of pubs, however, of which only five buildings remain and only two of these are still open. The Salvation Army had a presence in Ancoats, with the Star Hall and Crossley Hospital in Pollard Street. Crossley Court, flats belonging to the Salvation Army Housing Association, now stands on the site. Ancoats Hospital was located on Old Mill Street, adjacent to the Ashton Canal. This has been closed to patients for some time, and is currently under residential development. Thomas Horsfall opened the Manchester Art Museum, a free art gallery, in Ancoats in 1886. His aim was to create a morally elevating alternative to pubs.

Given the historically high levels of Irish and Italian immigration, a large proportion of Ancoats' population is Roman Catholic.

Aircraft were manufactured in Ancoats and this factory was at Brownsfield Mill, which was on the corner of Great Ancoats Street and Binns Place at the point where the Rochdale Canal passes below Great Ancoats Street. Here, A.V. Roe (Avro) established his factory in 1910. Men from Ancoats serving in the Army in France during the First World War were aware that aeroplanes they saw in action above them had been made in Ancoats.

In 1939, the Daily Express newspaper company opened new premises, which were built in the "functional" style, using new curtain-wall technology identical to that on the company's Daily Express Building in Fleet Street, London and in Glasgow.

The substantial economic activity generated by such a concentration of mills was halted by the slump in the cotton industry in the 1930s. Thereafter, the prosperity of the mills declined steadily, and the only new industry to establish itself in Ancoats was newspaper printing. Ancoats, like neighbouring Miles Platting and Collyhurst, became very run down and notorious for deprivation and crime. Cotton spinning ceased in Manchester and other textile-related uses were found for the mills: clothes manufacture, machinery repairs and warehouses for imported goods' rag trade.

The 1960s witnessed further decline as, during the mass clearance of the area's terraced homes, the population was re-housed in the north and east of the city. The mills, attracting decreasing rents, fell into disrepair.

Despite the clearance of Victorian terraces during the early 1960s and the relocation of most households to overspill estates like Hattersley and Gamesley, many new houses and flats were built in Ancoats by the local council. Inevitably, the local area's population was lower by 1970 than it had been a decade earlier, as the new housing developments were more spaced out, and some former residential areas had been redeveloped for commercial and industrial use.

Newspaper printing, one of Ancoats' 20th century industries, fell victim to changes in technology, with the Daily Express ceasing to be published from its famous black glass building in 1989. The closure of Express Printers was also the start of Ancoats' renewal, as the impact of low investment and increasing unemployment became recognised.

In June 1989, Manchester City Council designated land bounded by Great Ancoats Street, Oldham Road, Kemp Street, Wadeford Close, Jersey Street and the Rochdale Canal into a conservation area where a number of buildings were listed. While it protected a number of historically significant buildings, it made regeneration more difficult. In 1990, the Eastside Regeneration was formed, the first organisation created to regenerate the area. The Eastside Regeneration in turn spawned the formation of the Ancoats Build Preservation Trust in 1995 and the Ancoats Urban Village Company in 1996. Unfortunately, Manchester's bids for the 1996 and 2000 Olympics caused speculative buying of property in Ancoats in the early 1990s. When the bids failed the buildings were abandoned and decay accelerated. By 1998 it was estimated that 80% of business floor space in Ancoats was vacant.

In 2000 the government accepted the £250m New Islington Project to redevelop a 0.125-square-kilometre (31-acre) section of land between the Rochdale and Ashton Canals. To assist regeneration by preventing speculative purchase of land the North West Development Agency made a compulsory purchase order of land in the area. A target population of 15,000 by 2010 was set for the Ancoats area.

The first major residential development in the area was MM2 Apartments Manchester [1]. These Italian-inspired urban homes were built on land bounded by Great Ancoats Street–Henry Street and Jersey Street to Redhill Street. This former ice cream factory site is now home to 90 flats which were completed in 2012, and is now just one of several developments in the area.

Sarah Village is a major regeneration scheme on Great Ancoats Street which is unfinished as of 2012 due to the collapse of the developer BS Construction. The steel frame has been abandoned for several years. 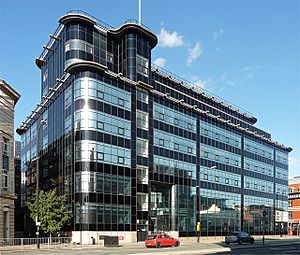 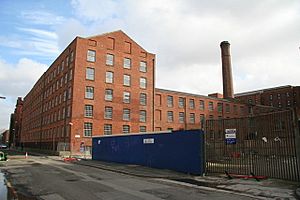 The Grade II* Murrays' Mills, one of the largest cotton-spinning buildings in the world.

The following Listed buildings are in the Ancoats conservation area:

All content from Kiddle encyclopedia articles (including the article images and facts) can be freely used under Attribution-ShareAlike license, unless stated otherwise. Cite this article:
Ancoats Facts for Kids. Kiddle Encyclopedia.