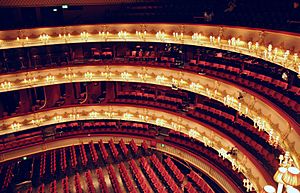 The Royal Opera House auditorium, stage to the left 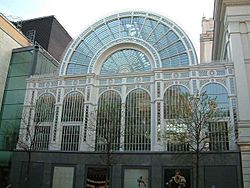 The Floral Hall of the Royal Opera House

The building that is now the Royal Opera House is the third building in that place. The first theatre to be built there in 1732 was burnt down in 1808. The second theatre opened in 1809 but was burnt down in 1856. Today's building was built in 1858, although a lot of it was rebuilt between 1996 and 2000. The auditorium (the main part where the audience sits) is nearly the same, but all the backstage rooms are new: the dressing rooms, rehearsal rooms, office space etc. There is an extra small theatre called the Linbury Theatre which is used for smaller performances. Together with the new restaurant areas it has helped to get more young people to come.

The Royal Opera House seats 2,268 people. There are seats downstairs (the stalls), four tiers of boxes, a balcony and a gallery.

The conductor ("Musical Director") of the Royal Opera House Orchestra is Antonio Pappano who is a young British conductor.

All content from Kiddle encyclopedia articles (including the article images and facts) can be freely used under Attribution-ShareAlike license, unless stated otherwise. Cite this article:
Royal Opera House Facts for Kids. Kiddle Encyclopedia.