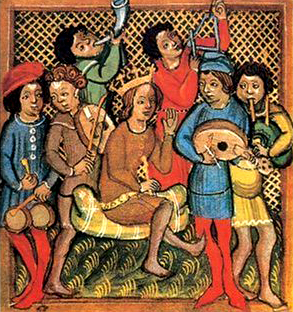 Il trovatore (The Troubadour) is an Italian opera in four acts. The music was written by Giuseppe Verdi. The story and words were written by Salvatore Cammarano. It is based on a play by Antonio Garcia Gutiérrez called El trovador. The opera was first performed in Rome on January 19, 1853. It was an instant hit.

Spain is suffering a civil war. Count di Luna fights for the Prince of Aragon. Manrico, a gypsy, fights for Prince Urgel.
Act 1. Ferrando tells of the old Count's two children. Years ago, one died and the other disappeared. An old gypsy was suspected. She was burnt at the stake. Her daughter Azucena vowed revenge. In the palace garden, Leonora waits for her mysterious lover. The Count di Luna is in love with Leonora. Manrico appears as Leonora's lover. The two men have a sword fight.

Act 2. At a gypsy camp, Azucena mutters about throwing her own child into a fire and saving the old Count's son. She orders Manrico to avenge her wrongs upon the head of Count di Luna. Manrico is ordered to man Castellor.
Act 3. Di Luna lays siege to Castellor. He captures Azucena and sends her off to the stake. Inside the castle Manrico and Leonora are awaiting their marriage. Word is received about Azucena. Manrico hurries off to save her.
Act 4. Manrico is captured and sentenced to death with Azucena. Leonora enters to take his place. She takes poison to avoid Di Luna. Di Luna in a rage orders Manrico beheaded. Azucena tells Di Luna he has just killed his own brother.

All content from Kiddle encyclopedia articles (including the article images and facts) can be freely used under Attribution-ShareAlike license, unless stated otherwise. Cite this article:
Il trovatore Facts for Kids. Kiddle Encyclopedia.