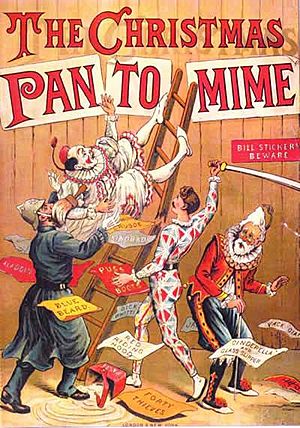 Pantomime (often called panto) is a kind of theatre entertainment usually performed around Christmas and the New Year in Britain and a few other English-speaking countries. It must not be confused with mime (acting with gestures but no speech). It is know for its comedy and audience participation. Pantomimes are usually meant for children-however it could be directed at adults

A pantomimos in Ancient Greece used to be an entertainment performed by a solo dancer. In the Middle Ages a form of theatre developed called Commedia dell'arte. This was similar to a pantomime. They told a story which had certain fixed characters: the lovers, the father, the servants etc.

The Pantomime first arrived in England as a short entertainment (entr'acte) between opera pieces. Eventually it became a separate show.

Today the pantomime is traditionally performed at Christmas. It is a show for children, but grownups like it as well. Usually a well-known story is told, e.g. Cinderella, Jack and the Beanstalk, Pinocchio, The Three Little Pigs, Puss in Boots, The Musicians of Bremen, Little Red Riding Hood and Goldilocks and the Three Bears and Snow White etc. There is a lot of spoken dialogue but there are also songs, and sometimes the audience join in. There are many traditions in pantomime. These are some of the main ones:

All content from Kiddle encyclopedia articles (including the article images and facts) can be freely used under Attribution-ShareAlike license, unless stated otherwise. Cite this article:
Pantomime Facts for Kids. Kiddle Encyclopedia.