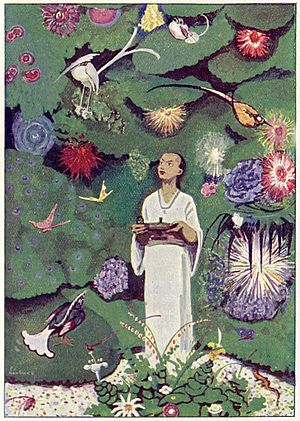 Aladdin with the oil lamp

Aladdin is a fictional person from the story Aladdin and the Enchanted Lamp, which is part of the Book of One Thousand and One Nights.

The young man Aladdin is told by a sorcerer (magician), who is pretending to be his uncle, to get him an oil lamp from a cave. Aladdin gets the lamp, but the sorcerer tries to trick him. So, Aladdin keeps the lamp for himself. Aladdin learns that inside the lamp there is a djinn. The djinn can fulfill every wish of the lamp's owner. With the djinn's help, Aladdin becomes rich and powerful and marries a princess.

The sorcerer returns and tricks Aladdin's wife into giving him the magic lamp. Aladdin finds out that in a ring he has, there is another djinn. This djinn helps Aladdin defeat the sorcerer, get back the magic lamp, and save his wife.

Adaptions (new versions of the story)

There have been different versions of the story:

All content from Kiddle encyclopedia articles (including the article images and facts) can be freely used under Attribution-ShareAlike license, unless stated otherwise. Cite this article:
Aladdin Facts for Kids. Kiddle Encyclopedia.