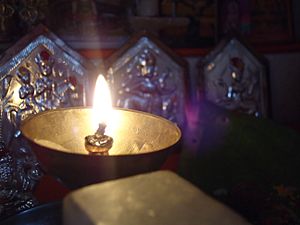 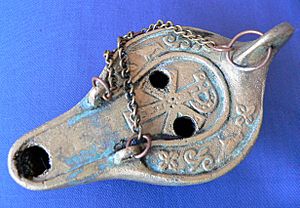 An oil lamp is a lamp used for lighting by burning oil. Usually, it produces a flame by burning olive oil, or another vegetable oil, or whale oil during the 1700s and 1800s. They burned cleaner, with less smoke, than candles and other sources of light before electricity.

The lamps were usually made of pottery or metal or glass. An old story in the 1001 Nights has Aladdin cleaning (rubbing the lamp) and making a Genie appear.

Late in the 19th century, those lamps were mostly replaced by kerosene lamps.

All content from Kiddle encyclopedia articles (including the article images and facts) can be freely used under Attribution-ShareAlike license, unless stated otherwise. Cite this article:
Oil lamp Facts for Kids. Kiddle Encyclopedia.