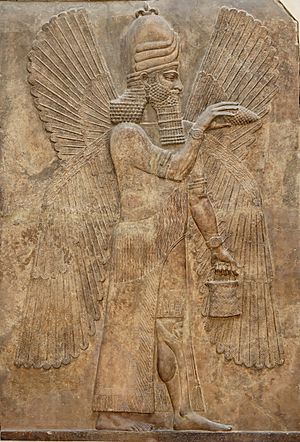 Genies or jinns or djinns are supposed to be magical beings or creatures with free will. They are originally found in ancient myths and legends of the Middle East, especially Arabia.

Nowadays, people in many Muslim countries like Saudi Arabia, Kuwait, Qatar, Lebanon, Palestine, Egypt, Iraq, Syria,United Arab Emirates, Libya, Algeria, Tunisia, Turkey, Iran, parts of Central Asia, Afghanistan and Pakistan believe in these Jinns or Djinns. Jinns are also common in legends and stories from the Middle East, for example in the One Thousand and One Nights.

The holy book of Muslims, the Quran also mentions Jinns, and says that they are made from fire or smoke. Together, the jinn, humans, devils and angels make up the four wise creations of God. Like human beings, the jinn can be good or bad.

In movies and on television

All content from Kiddle encyclopedia articles (including the article images and facts) can be freely used under Attribution-ShareAlike license, unless stated otherwise. Cite this article:
Genie Facts for Kids. Kiddle Encyclopedia.