The Thief of Bagdad facts for kids 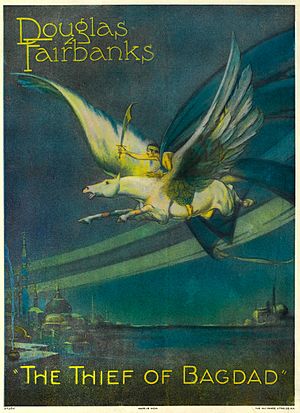 The Thief of Bagdad is a 1924 silent movie. It was directed by Raoul Walsh. It stars Douglas Fairbanks. The plot was adapted from One Thousand and One Nights. The movie is about a thief who falls in love with the daughter of the Caliph of Baghdad. Fairbanks was very athletic. This movie provided many moments for gymnastics. The movie was Fairbanks's favorite among all his movies.

Thief gave Fairbanks a new direction. He was a comedy star, but after this movie he became a "swashbuckler". The movie had many special effects such as flying carpets and monsters and magical Djinn. The Arabian-style set was huge. The movie was remade twice: once in 1940 with Sabu and then in 1961 with Steve Reeves. The Fairbanks version was selected for preservation in the United States National Film Registry in 1996.

All content from Kiddle encyclopedia articles (including the article images and facts) can be freely used under Attribution-ShareAlike license, unless stated otherwise. Cite this article:
The Thief of Bagdad Facts for Kids. Kiddle Encyclopedia.