Stephen L. "Steve" Reeves (21 January 1926 - 1 May 2000) was an American bodybuilder and actor. He was born in Glasgow, Montana. He moved to California with his mother at age 10. He trained as a bodybuilder. He joined the US Army and served in the Pacific during World War II.

After the war, he pursued bodybuilding. In 1946, he won the title of Mr. Pacific Coast. Within the next four years he won the world's most famous titles, including Mr. America, Mr. World, and Mr. Universe.

Reeves started acting. In 1954, he had some small parts in movies and was on television. In 1957, he made Hercules, a low budget movie based on the ancient Greek stories of the Golden Fleece. The movie was a great success. It made $5 million in the United States.

From 1959 through 1964, Reeves starred in many low budget peplum movies. In 1963, he married Aline Czarzawicz. The couple retired to Southern California in 1969. He wrote an exercise guide, Building the Classic Physique the Natural Way. He bought a ranch and bred horses. Reeves died from lymphoma in Escondido, California in 2000. 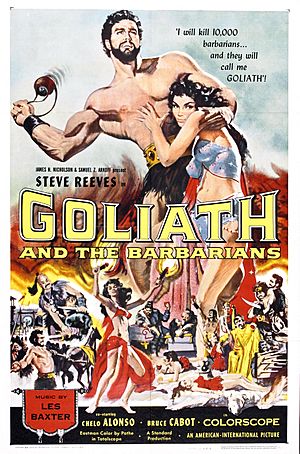 Goliath and the Barbarians, a film poster by Reynold Brown

All content from Kiddle encyclopedia articles (including the article images and facts) can be freely used under Attribution-ShareAlike license, unless stated otherwise. Cite this article:
Steve Reeves Facts for Kids. Kiddle Encyclopedia.