Jacksonville is a city in Jackson County, Oregon, United States, approximately 5 miles (8 km) west of Medford. It was named for Jackson Creek, which flows through the community and was the site of one of the first placer gold claims in the area. It includes Jacksonville Historic District, which was designated a U.S. National Historic Landmark in 1966. As of the 2010 census, the city population was 2,785, up from 2,235 at the 2000 census.

Jacksonville was founded following discovery of gold deposits in 1851–1852. With the creation of Jackson County, it became the county seat, a role which was transferred to nearby Medford in 1927.

Jacksonville was home to the first Chinatown in Oregon, founded by immigrants from San Francisco, California. Evidence of this chapter of history was uncovered early in March 2004 when road work uncovered artifacts dating to the 1850s and 1860s. Construction was halted while archeologists performed four days of rescue excavations. Their findings included broken Chinese bowls and tea cups, handmade bottles, and fragments of opium paraphernalia and Chinese coins.

When the gold deposits were worked out, and the railway bypassed Jacksonville in 1884, the city's economy slowed. This had the unintended benefit of preserving a number of structures, which led to Jacksonville being designated a National Historic District in 1966, covering over 100 buildings. It was cited as a "mid-19th century inland commercial city significant for its magnificent group of surviving unaltered commercial and residential buildings. The city was the principal financial center of southern Oregon until it was bypassed by the railroad."

According to the United States Census Bureau, the city has a total area of 1.89 square miles (4.90 km2), all of it land. 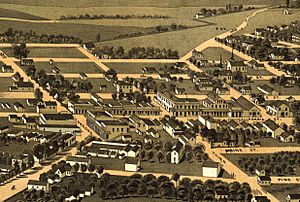 There were 1,377 households, of which 18.3% had children under the age of 18 living with them, 50.5% were married couples living together, 6.1% had a female householder with no husband present, 2.0% had a male householder with no wife present, and 41.3% were non-families. 36.9% of all households were made up of individuals, and 21.1% had someone living alone who was 65 years of age or older. The average household size was 2.02 and the average family size was 2.62.

Jacksonville is home to the Britt Festival, a seasonal music festival that takes place at an open-air amphitheater. The site was selected in 1963 because of the acoustic qualities of the surrounding hills. The popular concert series draws national pop, country, alternative and contemporary music acts. It is named after Peter Britt, a pioneer and owner of the land now used for Britt Park. 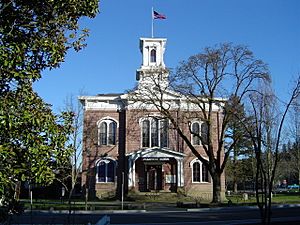 The Southern Oregon Historical Society (SOHS) was formed in 1946 to save the endangered 1880s Jackson County Courthouse. The society opened the Jacksonville Museum in the courthouse building on July 10, 1950, and operated it until it closed in 2006 because of lack of funding; as of 2014 the courthouse, which is now owned by the City of Jacksonville, is not open to the public. The society now operates Hanley Farm in Central Point and a research library in Medford.

The 1859 B. F. Dowell House, a private residence and contributing property, is the oldest Italianate brick residence in Oregon.

The William Bybee House, near Jacksonville, now known as Bybee's Historic Inn, is individually listed on the National Register of Historic Places.

Jacksonville has one sister city, as designated by Sister Cities International:

Jacksonville is served by the Medford School District and is home to Jacksonville Elementary School.

All content from Kiddle encyclopedia articles (including the article images and facts) can be freely used under Attribution-ShareAlike license, unless stated otherwise. Cite this article:
Jacksonville, Oregon Facts for Kids. Kiddle Encyclopedia.