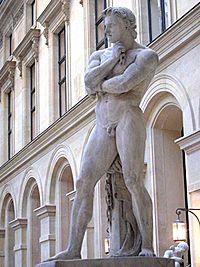 Spartacus statue at the Louvre in Paris, France

Spartacus (circa 120 BC – circa 70 BC, at the end of the Third Servile War), according to Roman historians, was a gladiator-slave who became the leader of an unsuccessful slave uprising against the Roman Republic.

All content from Kiddle encyclopedia articles (including the article images and facts) can be freely used under Attribution-ShareAlike license, unless stated otherwise. Cite this article:
Spartacus Facts for Kids. Kiddle Encyclopedia.