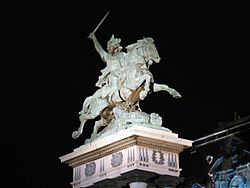 Statue of Vercingetorix by Bartholdi, on Place de Jaude, in Clermont-Ferrand

Vercingetorix ( in Gaulish) born 72 BC, died 46 BC) was a chieftain of the Gallic tribe of the Arverni. He led the great Gallic war against Roman imperialism in 52 BC. His name in Gaulish means "over-king of the marching men"; the "marching men" would now be called "infantry".

All content from Kiddle encyclopedia articles (including the article images and facts) can be freely used under Attribution-ShareAlike license, unless stated otherwise. Cite this article:
Vercingetorix Facts for Kids. Kiddle Encyclopedia.