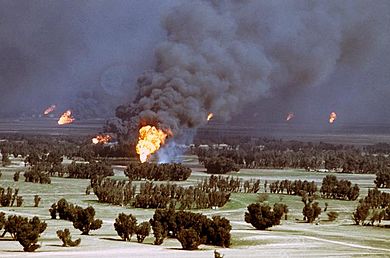 A scorched-earth policy is a military strategy. The goal is to destroy anything that might be useful to the enemy while the enemy is going through or running away from a place. Any useful things that could be used by the enemy may be targeted, for example food sources, water supplies, transportation, communications, industrial resources, and even the local people themselves.

The policy can be done by the military in enemy territory, or in its own home territory.

Notable historic examples of scorched-earth tactics include the Russian army's strategy during the failed Swedish invasion of Russia, the failed Napoleonic invasion of Russia, William Tecumseh Sherman's March to the Sea in the American Civil War, colonel Kit Carson's subjugation of the American Navajo Indians, Lord Kitchener's advance against the Boers, the initial Soviet retreat commanded by Joseph Stalin during the German Army's invasion of the Soviet Union in the Second World War, the subsequent Nazi German retreat on the Eastern Front, and the burning 605-732 oil wells by retreating Iraqi military forces in the Gulf War.

All content from Kiddle encyclopedia articles (including the article images and facts) can be freely used under Attribution-ShareAlike license, unless stated otherwise. Cite this article:
Scorched earth Facts for Kids. Kiddle Encyclopedia.