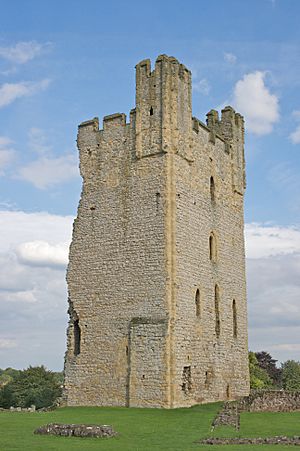 Helmsley Castle (Yorkshire) was slighted by demolishing half of the east tower in 1644.

Slighting is the deliberate damage of an important building. In the Middle Ages, castles were slighted during war. Rich and powerful people built and owned castles, and were proud of them. A king or queen could use slighting as a way to punish people who rebelled against them. Sometimes the owner feared they would lose the castle in an attack, and broke parts of the castle so that it would not be useful to other people. Occasionally, a king or queen might order someone to dismantle their own castle if they did not get permission to build it.

All content from Kiddle encyclopedia articles (including the article images and facts) can be freely used under Attribution-ShareAlike license, unless stated otherwise. Cite this article:
Slighting Facts for Kids. Kiddle Encyclopedia.