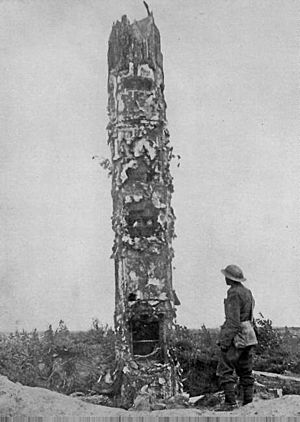 German World War I observation post disguised as a tree.

Military tactics (Greek: Taktikē, the art of organizing an army) are the techniques for using weapons or military units to fight an enemy in battle. It is distinct from strategy which concerns a longer time scale. Tactics have changed over time, mainly because of changes in military technology.

Tactics is the method to use military forces in combat. Tactics basically include many types of the military operations such as frontal assaults, attempts to flank the enemy, keeping troops in reserve and the use of ambushes. Specialized tactics exist for many situations, ranging from securing a room or individual building, to large-scale operations such as establishing air superiority over a region or the use of Shock tactics. Military tactics are employed at all levels of command, from individual and group up to entire armed forces. Military theorist Carl von Clausewitz said "tactics is the art of using troops in battle; strategy is the art of using battles to win the war."

All content from Kiddle encyclopedia articles (including the article images and facts) can be freely used under Attribution-ShareAlike license, unless stated otherwise. Cite this article:
Military tactics Facts for Kids. Kiddle Encyclopedia.