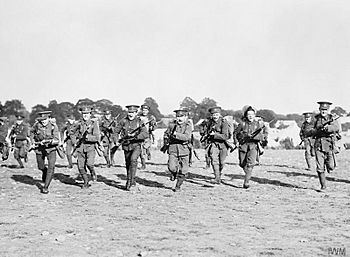 A Bayonet attack can be a very effective shock tactic

Shock tactics are those military tactics designed to overwhelm an enemy with fear, causing panic and confusion. Shock tactics are as old as warfare itself. The Mongols got their reputation for being invincible by the use of shock tactics. Numbers of Medieval knights mounted on their warhorses made coordinated shock attacks into the ranks of enemy soldiers. Robert E. Lee saw the advantage of the shock attack as not so much killing enemy soldiers, but to "create a panic and virtually destroy the [enemy] army." The disadvantage of a shock attack is that the attacker may suffer heavy casualties. During World War I, for example, Germany suffered great losses with its use of the shock attack.

Ancient armies often defeated their enemy through through the psychological impact of shock tactics.

All content from Kiddle encyclopedia articles (including the article images and facts) can be freely used under Attribution-ShareAlike license, unless stated otherwise. Cite this article:
Shock tactics Facts for Kids. Kiddle Encyclopedia.