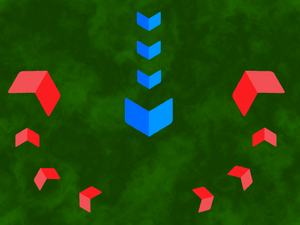 The pincer movement, or double envelopment, is a tactic in which forces attack both flanks (sides) of an enemy formation at the same time. The pincer movement can be used when opposing forces advance towards the center of an army. That army responds by moving its outside forces to the enemy's flanks to surround it. At the same time, a second layer of pincers may attack on the more distant flanks to cut off the enemy reinforcements.

A full pincer movement leads to the attacking army facing the enemy in front, on both flanks, and in the rear. If attacking pincers link up in the enemy's rear, the enemy is encircled. Such battles often end in surrender or destruction of the enemy force. The encircled force can try to break out or counterattack. A successful flanking maneuver can be difficult to accomplish.

Sun Tzu, in The Art of War, talked about the maneuver. But he made the point to leave a surrounded enemy an escape route. Otherwise, faced with death, a surrounded enemy would fight much harder. This advice seems to have been followed by General George Patton when his sweeping pincer movement trapped the German army in the Falaise pocket in August 1944.

All content from Kiddle encyclopedia articles (including the article images and facts) can be freely used under Attribution-ShareAlike license, unless stated otherwise. Cite this article:
Pincer movement Facts for Kids. Kiddle Encyclopedia.