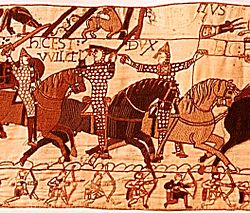 Bayeux Tapestry fragment showing Duke William (center) "here is Duke William", showing him turning the Normans back into the battle

A feigned retreat is a military tactic where a force will pretend to be defeated, fake a retreat, then while they are being pursued, turn and ambush the enemy. It can be used to cause confusion in the enemy ranks or to force some to leave and weaken their battle formations. Battlefield commanders have had to use this tactic carefully so the feigned retreat did not become a real retreat. It was a tactic used in ancient history and is still being used today. Sun Tzu wrote about it in his book The Art of War. He warned his readers: "When some are seen advancing and some retreating, it is a lure."

All content from Kiddle encyclopedia articles (including the article images and facts) can be freely used under Attribution-ShareAlike license, unless stated otherwise. Cite this article:
Feigned retreat Facts for Kids. Kiddle Encyclopedia.