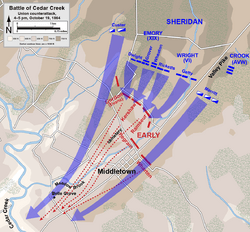 A counterattack is a tactic used in response to an attack. The modern term became popular in "war games". The purpose is to neutralize or stop the advantage gained by an enemy during an attack. At the same time it is used to regain lost ground or destroy the attacking enemy. A counterattack depends on surprise, speed, and doing what the enemy does not expect. To be most effective it needs to be launched before an enemy has time to get organized and has not yet strengthened his new position. The Chinese general and strategist Sun Tzu (544 BC – 496 BC) is the earliest writer who mentioned the advantages of a bold counterattack.

All content from Kiddle encyclopedia articles (including the article images and facts) can be freely used under Attribution-ShareAlike license, unless stated otherwise. Cite this article:
Counterattack Facts for Kids. Kiddle Encyclopedia.