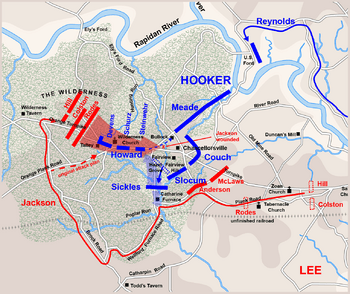 The Battle of Chancellorsville, Jackson's flanking maneuver against Howard

In military tactics, a flanking maneuver (also called a flank attack), is an attack on the sides or rear of an opposing force. If a flanking maneuver succeeds, the opposing force would be surrounded or have to fight from two or more directions. This reduces the ability of the outflanked force to move or defend itself. Unlike an envelopment, which depends on the enemy's defensive position, any obstacles and the terrain, a flanking maneuver uses the enemy's forward movement to create an attackable flank. A psychological advantage may also be present. The confusion and threat from multiple directions can often cause shock and panic. This may cause soldiers to run from the battle. A larger-scaled tactical flanking is called a strategic flanking. This is where the targets of the flanking could be as large as divisions or even entire armies.

A flanking maneuver works best when an enemy is engaged at their front. Often an opposing force must be maneuvered into a position where a flanking attack would work. An ideal situation is getting them into a position where their front is narrow and the flanks are long. A classic example of a flanking maneuver was by Confederate general Stonewall Jackson against the Union Army of the Potomac at the Battle of Chancellorsville.

All content from Kiddle encyclopedia articles (including the article images and facts) can be freely used under Attribution-ShareAlike license, unless stated otherwise. Cite this article:
Flanking maneuver Facts for Kids. Kiddle Encyclopedia.