Battle of Cowpens facts for kids

The Battle of Cowpens was an engagement during the American Revolutionary War fought on January 17, 1781 near the town of Cowpens, South Carolina, between U.S. forces under Brigadier General Daniel Morgan and British forces under Lieutenant Colonel Sir Banastre Tarleton, as part of the campaign in the Carolinas (North and South). The battle was a turning point in the American reconquest of South Carolina from the British.

A small force of the Continental Army under the command of Morgan had marched to the west of the Catawba River, in order to forage for supplies and raise the morale of local Colonial sympathizers. The British had received incorrect reports that Morgan's army was planning to attack the important strategic fort of Ninety Six, held by American Loyalists to the British Crown and located in the west of the Carolinas. The British considered Morgan's army a threat to their left flank. General Charles Cornwallis dispatched cavalry (dragoons) commander Tarleton to defeat Morgan's command. Upon learning Morgan's army was not at Ninety Six, Tarleton, bolstered by British reinforcements, set off in hot pursuit of the American detachment.

Morgan resolved to make a stand near the Broad River. He selected a position on two low hills in open woodland, with the expectation that the aggressive Tarleton would make a headlong assault without pausing to devise a more intricate plan. He deployed his army in three main lines. Tarleton's army, after exhaustive marching, reached the field malnourished and heavily fatigued. Tarleton attacked immediately; however, the American defense-in-depth absorbed the impact of the British attack. The British lines lost their cohesion as they hurried after the retreating Americans. When Morgan's army went on the offensive, it wholly overwhelmed Tarleton's force.

Tarleton's brigade was wiped out as an effective fighting force, and, coupled with the British defeat at the Battle of Kings Mountain in the northwest corner of South Carolina, this action compelled Cornwallis to pursue the main southern American army into North Carolina, leading to the Battle of Guilford Court House, and Cornwallis's eventual defeat at the Siege of Yorktown in Virginia in October 1781.

In the opinion of John Marshall, "Seldom has a battle, in which greater numbers were not engaged, been so important in its consequences as that of Cowpens."

Interesting facts about the Battle of Cowpens 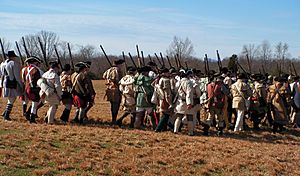 The battle in film

All content from Kiddle encyclopedia articles (including the article images and facts) can be freely used under Attribution-ShareAlike license, unless stated otherwise. Cite this article:
Battle of Cowpens Facts for Kids. Kiddle Encyclopedia.