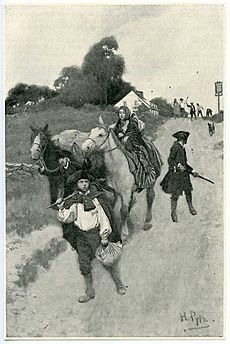 Loyalists were people in the Thirteen Colonies who opposed the American Revolutionary War. They were also called Tories. They fought with the British against the Continental Army and Continental Congress that they felt was oppressing them. In many areas, Loyalists were treated very roughly by revolutionaries (who often called themselves "Patriots"). Tory lands and other properties were taken away, and sometimes they were put into jail or even killed. Some formed militias, fighting along with the British Army against the rebels.

After the war, many Loyalists sought asylum in Canada to escape the new United States and to stay loyal to King George and the British Empire.

Loyalists came from all walks of life. The majority were small farmers, artisans and shopkeepers. Not surprisingly, most British officials remained loyal to the Crown. Wealthy merchants tended to remain loyal, as did Anglican ministers, especially in Puritan New England. Loyalists also included some blacks (to whom the British promised freedom), Indians, indentured servants and some German immigrants, who supported the Crown mainly because George III was of German origin.

The number of Loyalists in each colony varied. Recent estimates suggest that half the population of New York was Loyalist; it had an aristocratic culture and was occupied throughout the Revolution by the British. In the Carolinas, back-country farmers were Loyalist, whereas the Tidewater planters tended to support the Revolution.

During the Revolution, most Loyalists suffered little from their views. However, a minority, about 19,000 Loyalists, armed and supplied by the British, fought in the conflict.

The Paris Peace Treaty required Congress to restore property confiscated from Loyalists. The heirs of William Penn in Pennsylvania, for example, and those of George Calvert in Maryland received generous settlements. In the Carolinas, where enmity between rebels and Loyalists was especially strong, few of the latter regained their property. In New York and the Carolinas, the confiscations from Loyalists resulted in something of a social revolution as large estates were parceled out to yeoman farmers.

About 100,000 Loyalists left the country, including William Franklin, the son of Benjamin, and John Singleton Copley, the greatest American painter of the period. Most settled in Canada. Brantford, Ontario for example was started by Iroquois refugees. Some eventually returned, although several state governments excluded the Loyalists from holding public office. Most of the Black Loyalists left, as they faced re-enslavement if they remained in the USA. In the decades after the Revolution, Americans preferred to forget about the Loyalists. Apart from Copley, the Loyalists became nonpersons in American history.

All content from Kiddle encyclopedia articles (including the article images and facts) can be freely used under Attribution-ShareAlike license, unless stated otherwise. Cite this article:
Loyalist (American Revolution) Facts for Kids. Kiddle Encyclopedia.