The Catawba River originates in Western North Carolina and flows into South Carolina, where it is known as the Wateree River. The river is approximately 220 miles (350 km) long. It rises in the Appalachian Mountains and drains into the Piedmont, where it has been impounded through a series of reservoirs for flood control and generation of hydroelectricity. The river is named after the Catawba tribe of Native Americans, which lives on its banks. In their language, they call themselves "yeh is-WAH h’reh", meaning "people of the river."

The river rises in the Blue Ridge Mountains in western present-day McDowell County, North Carolina, approximately 20 miles (30 km) east of Asheville. It flows ENE, falling over two waterfalls, Upper Catawba Falls and Catawba Falls, before being dammed by Lake James, and joining the Linville River. It passes north of Morganton, then southeast through Lake Rhodhiss and Lake Hickory just north of Hickory, and into the Lake Norman reservoir. From Lake Norman it flows south, passing west of Charlotte, then flowing through the Mountain Island Lake and Lake Wylie reservoirs, where it exits the reservoirs approximately 10 miles (15 km) south of the border between North Carolina and South Carolina. The confluence of the South Fork Catawba River and Catawba River is submerged by Lake Wylie near the NC/SC state line.

The river flows into northern South Carolina, passing Rock Hill, through Fishing Creek Reservoir near Great Falls, and into the Lake Wateree reservoir, approximately 30 miles (50 km) northeast of Columbia. At the now-submerged confluence with Wateree Creek, it becomes known as the Wateree River.

Map of the Catawba River in South Carolina

The Catawba has been controlled by several dams, including the following:

A river at risk

Starting in the early autumn months of 2007, residents and businesses of the Catawba basin, along with large swaths of the Southern United States, began to feel the effects of an extreme drought. On October 15, 2007, the Morganton News Herald reported that North Carolina Governor Mike Easley described the drought as "the worst in recorded history".

On January 29, 2008, Duke Energy, the utility responsible for managing the Catawba River, extended its estimated time frame for Stage 4 water restrictions to August. The extension was possible because of conservation measures and the 6 inches of rain the basin received in December. However, area leaders converged on Valdese to hear presentations from representatives of the N.C. Rural Center, N.C. Department of Commerce, N.C. Department of Environment and Natural Resources, and the Appalachian Regional Commission about grants and loans available to help pay for solutions to the drought.

In April 2008 the environmental group American Rivers named the Catawba-Wateree River "the most endangered river in America." Reasons cited for the river's condition are the drought, the presence of 11 hydroelectric dams, global warming, and unchecked development along its banks, with the latter reported as the most serious threat.

On June 11, 2008, South Carolina Governor Mark Sanford signed legislation denoting the Catawba as a state scenic river. The designation carries no land-use restrictions, but it allows the state to convene an advisory group to address river-related concerns.

On June 29, 2009, the EPA announced that four of the top 44 "High Hazard Ash Ponds" in the United States are on the Catawba River. Two ash ponds are adjacent to and discharge into Mountain Island Lake. The EPA High Hazard list also includes ash ponds on Lake Wylie and Lake Norman.

On December 11, 2014, Duke Energy received approval from North Carolina to dump coal ash (containing arsenic, lead, thallium and mercury, among other heavy metals) from the Marshall Steam Station into Lake Norman in order to repair a rusted, leaking pipe at their facility. Groundwater at the Marshall Steam Station flows toward Lake Norman, and the contaminated field abuts the lake for about 30 feet of shoreline near its largest coal ash basin, threatening water quality in the lake.

On October 3, 2015, Duke Energy reported that a sinkhole had formed at the base of the Marshall Steam Station dam north of Charlotte on Lake Norman. The Department of Environmental Quality (DEQ) says Duke Energy placed a liner in the hole and filled it with crushed stone.

The Catawba River basin is one of only four areas left in the southeast with significant populations of Hymenocallis coronaria, the Shoals spider lily. It has one large population left at Landsford Canal State Park. 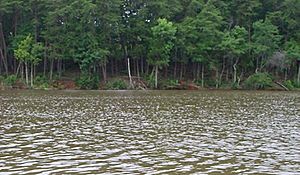 On the Catawba River

The Catawba River is crossed by many highways over its course. (Note: this list may be incomplete)

All content from Kiddle encyclopedia articles (including the article images and facts) can be freely used under Attribution-ShareAlike license, unless stated otherwise. Cite this article:
Catawba River Facts for Kids. Kiddle Encyclopedia.