Lancaster County is a county located in the U.S. state of South Carolina. As of the 2016 census estimate, its population was 89,594. Its county seat is Lancaster which has an urban population of 23,979. The county was created in 1785.

Lancaster County is included in the Charlotte-Concord-Gastonia, NC-SC Metropolitan Statistical Area. It is located in the Piedmont region. 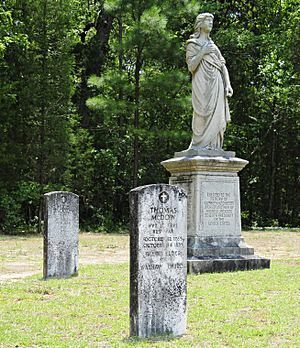 For hundreds of years the Catawba Indians claimed all of present Lancaster County as part of their tribal lands. The Catawba were once considered one of the most powerful Southeastern Siouan-speaking tribes. The Catawba and other Siouan peoples are believed to have coalesced as individual tribes in the Southeast. Primarily involved in agriculture, the Catawba were friendly toward early European Immigrants.

When the first White people came in the early 1750s they settled between Rum Creek and Twelve Mile Creek. Waxhaw Creek within this area had taken its name from the Waxhaw Indian tribe. The majority of the new settlers were Scots-Irish from Pennsylvania; others from North Carolina and Virginia joined them.

A second settlement was made in the lower part of the present Lancaster County on Hanging Rock Creek. The first grant was made there in 1752, and included the huge overhanging mass of rock from which the creek takes its name. About the time this section was opened up, others came in and settled along Lynches Creek, Little Lynches creek, Flat Creek, Beaver Creek, and lower Camp Creek. In coming to the Lancaster area, the first settlers had to follow old Indian paths, which became traveled so frequently, they were coming to be known as roads.

The Rocky River Road is an old route that originated as an Indian path. Along there in the American Revolutionary War, Colonel Abraham Buford fled from Tarleton and was overtaken a few miles south of the North Carolina state line where the Patriot forces were defeated in a controversial struggle known as the Battle of Waxhaws, also known as Bufords Massacre to locals. Today, the Rocky River Road is part of South Carolina Highway 522, the latter following the old thoroughfare very closely.

All content from Kiddle encyclopedia articles (including the article images and facts) can be freely used under Attribution-ShareAlike license, unless stated otherwise. Cite this article:
Lancaster County, South Carolina Facts for Kids. Kiddle Encyclopedia.