The city of Lancaster is the county seat of Lancaster County, South Carolina, United States, located in the Charlotte Metropolitan Area. As of the United States Census of 2010, the city population was 8,526. The city was named after the famous House of Lancaster. 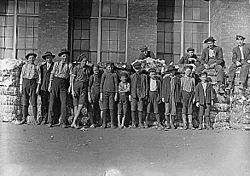 Lancaster is home to the Lancaster County School District, SC which has around 11 elementary schools, 5 middle schools, and 4 high schools. In 2008 South Carolina Governor Mark Sanford named Andrew Jackson Middle School, located in nearby Kershaw, as the recipient of the state's Best Special Education School Award. The city of Lancaster is also home to the University of South Carolina at Lancaster also known as USCL.

All content from Kiddle encyclopedia articles (including the article images and facts) can be freely used under Attribution-ShareAlike license, unless stated otherwise. Cite this article:
Lancaster, South Carolina Facts for Kids. Kiddle Encyclopedia.