Indian Land is an unincorporated community in the northernmost part (the "Panhandle") of Lancaster County, South Carolina, United States. It lies east of Fort Mill, just south of Ballantyne in southern Charlotte, and west of the villages of Marvin and Waxhaw in North Carolina.

Indian Land is a major suburb of Charlotte, North Carolina, located 20 miles (33 km) from Uptown. While not incorporated, the community is assigned with the ZIP code 29707. U.S. Highway 521 is a major highway that runs through the community and connects Indian Land with Charlotte to the north and greater Lancaster County to the south.

The third and final reading of the Panhandle's Highway Corridor Overlay District was approved on June 9, 2014, which applies to properties along Charlotte Highway (U.S. 521) from Waxhaw Highway (S.C. 75) north to the state line and Fort Mill Highway (S.C. 160) east to the county line. The overlay district sets aesthetic requirements on new construction along the corridors covering everything from building materials, placement and setbacks to signage, sidewalks and landscaping.

There is an effort underway to incorporate the area into a municipality, separate from Lancaster County. The goal of this incorporation is to give Indian Land a voice on the local and state levels with enhanced services for the community. The plan aims to control the growth of Indian Land while preserving the charm of this once rural area. 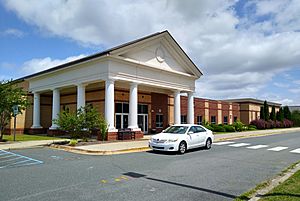 Indian Land has a public library, a branch of the Lancaster County Library.

All content from Kiddle encyclopedia articles (including the article images and facts) can be freely used under Attribution-ShareAlike license, unless stated otherwise. Cite this article:
Indian Land, South Carolina Facts for Kids. Kiddle Encyclopedia.