Waxhaw is a town in Union County, North Carolina, United States. The population was 9,859 according to the 2010 Census. The name is derived from the local people who lived in the area known as the Waxhaw people.

According to the United States Census Bureau, the town has a total area of 11.54 square miles (29.9 km2).Waxhaw is located north of Lancaster, South Carolina and lies about twelve miles south of the Charlotte city limit.

Waxhaw is located in the historic region called the Waxhaws and named after the indigenous Native American tribe that lived there prior to colonial settlement. Waxhaw is in the Piedmont region of North Carolina, which is a wooded area with rolling hills. This region is where gold was first discovered in the United States. The Howie Gold Mine is not far from the city limits. 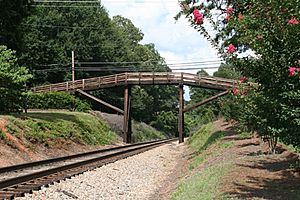 Footbridge over the railway tracks

Originally called the Wysacky, the community was settled by European-Americans in the mid-eighteenth century. Most settlers were of German and Scots-Irish origin. Settlers became subsistence farmers and were known for being independent. Andrew Jackson, the seventh President of the United States, was born nearby in 1767. There is some disagreement as to which of the Carolinas was his birthplace because of the proximity of the border.

Beginning in the late 19th century, the community began to develop cotton mill factories for manufacturing textiles. The railroad helped increase access for its products. Cotton manufacturing was important to the region through the 1940s. Postwar changes in the economy, with shifts of the textile industry to jobs to other areas and out of the country, required the community to adapt to new conditions.

Waxhaw has evolved as an antique and fine dining center. Its Small Town Main Street committee is working on an integrated approach to developing and marketing the historic center of town. Waxhaw currently has dozens of specialty shops and dining restaurants. Restaurants located in town range from mom & pop restaurants to fine dining bistros. The Waxhaw Historic District is on the National Register of Historic Places. It includes retail businesses as well as architecturally significant houses near the center of town. Also listed is the Pleasant Grove Camp Meeting Ground.

Residents and town officials are working on additional improvement plans. In the downtown area, there is a town park and a skate park for youths. New housing has been built along NC 75 to the east and west of town, as well as NC 16 (Providence Road) to the north.

Near Waxhaw is Cane Creek Park, a 1,050-acre (4.2 km2) park, featuring scenic areas and recreation activities. The facility, on Harkey Road south of Waxhaw, was a cooperative venture between Union County, the Union Conservation District, and the Soil Conservation Service of the U.S. Department of Agriculture.

There were 3,242 households, out of which 41.8% had children under the age of eighteen living with them, 81.0% were married couples living together, 10.5% had a female householder with no husband present, and 19.0% were non-families. The average household size was 3.04 and the average family size was 3.41.

All content from Kiddle encyclopedia articles (including the article images and facts) can be freely used under Attribution-ShareAlike license, unless stated otherwise. Cite this article:
Waxhaw, North Carolina Facts for Kids. Kiddle Encyclopedia.