Union County is a county located in the U.S. state of North Carolina. As of the 2010 census, the population was 201,292. Its county seat is Monroe.

The county was formed in 1842 from parts of Anson County and Mecklenburg County. Its name was a compromise between Whigs, who wanted to name the new county for Henry Clay, and Democrats, who wanted to name it for Andrew Jackson. The Helms, Starnes, McRorie, and Belk families took a major part in the Monroe and Charlotte, North Carolina. Most of these families came from Goose Creek Township.

Monroe, the county seat of Union County, also became a focal point during the Civil Rights Movement. In 1958, local NAACP Chapter President Robert F. Williams defended a nine-year-old African-American boy who had been kissed by a white girl in an incident known as the Kissing Case. A second African-American boy, aged seven, was also convicted and sentenced to live in a juvenile reformatory until he was 21 for simply witnessing the act. In 1961, Williams was accused of kidnapping an elderly white couple, when he sheltered them in his house during a very explosive situation of high racial tensions. Williams fled and went into exile in Cuba and in the People's Republic of China before returning to the United States. 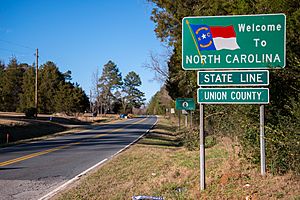 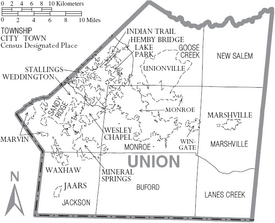 All content from Kiddle encyclopedia articles (including the article images and facts) can be freely used under Attribution-ShareAlike license, unless stated otherwise. Cite this article:
Union County, North Carolina Facts for Kids. Kiddle Encyclopedia.