The Jack Russell Terrier is a small terrier that has its origins in fox hunting. It is principally white-bodied and smooth, rough or broken-coated but can be any colour.

Jack Russells are an energetic breed that rely on a high level of exercise and stimulation and are relatively free from serious health complaints. Originating from dogs bred and used by Reverend John Russell in the early 19th century, from whom the breed takes its name, the Jack Russell has similar origins to the modern Fox terrier. It has gone through several changes over the years, corresponding to different use and breed standards set by kennel clubs. Recognition by kennel clubs for the Jack Russell breed has been opposed by the breed's parent societies – which resulted in the breeding and recognition of the Parson Russell terrier. Jack Russells have appeared many times in film, television, and print – with several historical dogs of note. 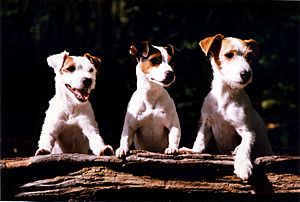 Jack Russell terriers come in a variety of coat types, and with a range of markings

Due to their working nature, Jack Russell terriers remain much as they were some 200 years ago. They are sturdy, tough, and tenacious, measuring between 10–15 inches (25–38 cm) at the withers, and weigh 14–18 pounds (6.4–8.2 kg). The body length must be in proportion to the height, and the dog should present a compact, balanced image. Predominantly white in coloration (more than 51%) with black and/or brown and/or tan markings, they exhibit either a smooth, rough or a combination of both which is known as a broken coat. A broken-coated dog may have longer hair on the tail or face than that which is seen on a smooth-coated dog.

The Jack Russell should always appear balanced and alert. As it is primarily a working terrier, its most important physical characteristic is its chest size, which must not be so large that it prevents the dog from entering and working in burrows. The red fox is the traditional quarry of the Jack Russell terrier, so the working Jack Russell must be small enough to pursue it. 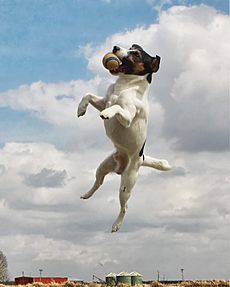 Jack Russells are first and foremost a working terrier. Originally bred to bolt foxes from their dens during hunts. Jack Russells tend to be extremely intelligent, athletic, fearless, and vocal dogs. It is not uncommon for these dogs to become moody or destructive if not properly stimulated and exercised, as they have a tendency to bore easily and will often create their own fun when left alone to entertain themselves.

Their high energy and drive make these dogs ideally suited to a number of different dog sports such as flyball or agility. Obedience classes are also recommended to potential owners, as Jack Russells can be stubborn at times and aggressive towards other animals and humans if not properly socialized.

Despite their small size, these dogs are not recommended for the condominium or apartment dweller unless the owner is ready to take on the task of providing the dog with the necessary amount of exercise and stimulation. They have a tremendous amount of energy for their size, a fact which can sometimes lead to trouble involving larger animals. They may seem never to tire and will still be energetic after their owner has called it a day. While socialised members of the breed are friendly towards children, they will not tolerate abuse even if it is unintentional.

The breed has a reputation for being healthy with a long lifespan. Jack Russells can live from 13 to 16 years given proper care.

All content from Kiddle encyclopedia articles (including the article images and facts) can be freely used under Attribution-ShareAlike license, unless stated otherwise. Cite this article:
Jack Russell Terrier Facts for Kids. Kiddle Encyclopedia.