Stanly County is a county in the U.S. state of North Carolina. As of the 2020 census, the population was 62,504. Its county seat is Albemarle.

The site of modern-day Stanly County was originally peopled by small tribes of hunter-gatherers and Mound Builders whose artifacts and settlements have been dated back nearly 10,000 years. Large-scale European settlement of the region came in the mid-18th century via two primary waves: immigrants of Dutch, Scots-Irish and German descent moved from Pennsylvania and New Jersey seeking enhanced religious and political tolerance, while immigrants of English backgrounds came to the region from Virginia and the Cape Fear River Basin in Eastern North Carolina.

In early English colonial times, the Stanly County area was politically part of the New Hanover Precinct, out of which the Bladen Precinct was created in 1734. The renamed Bladen County was subdivided to create Anson County in 1750, which in turn spawned Montgomery County in 1779. 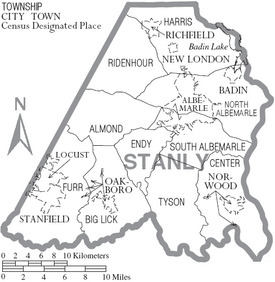 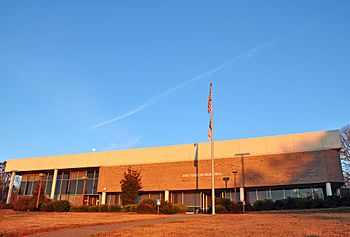 All content from Kiddle encyclopedia articles (including the article images and facts) can be freely used under Attribution-ShareAlike license, unless stated otherwise. Cite this article:
Stanly County, North Carolina Facts for Kids. Kiddle Encyclopedia.