Albemarle is a small city and the county seat of Stanly County, North Carolina, United States. The population was 15,903 in the 2010 Census. Gerald R. "Ronnie" Michael (a former police chief in the city) serves as Mayor and Albemarle has a seven-member City Council elected in a combination of at-large and district seats. Albemarle has operated under the Council-Manager form of government since 1962. Michael Ferris has served as City Manager since December 2014 and previously served as Assistant City Manager for nearly two decades. The City Manager is appointed by the City Council, and is responsible for the day-to-day administration of City government. The City's Department Heads report directly to the City Manager, who is also responsible for development and administration of the City's annual budget.

This place-name is derived of the English noble surname Albemarle, which is the French version of the medieval latinization Albamarla of the town Aumale in Normandy, France. From Vulgar Latin alba, "white" and margila, "marlstone". The word root can be explained entirely with two Celtic words: alba, "white", later "heaven" (Cf. Albion), the Latin word alba would be a Deckname for it and margila, which derives of the Celtic marga. The Latin expression albamargila would be an exact loan translation of the Celtic one, glisomarga, "white marl".

The site of modern-day Albemarle was originally peopled by small tribes of hunter-gatherers and mound builders whose artifacts and settlements have been dated back nearly 10,000 years. Large-scale European settlement of the region came in the mid-18th century via two primary waves: immigrants of Dutch, Scots-Irish and German descent moved from Pennsylvania and New Jersey seeking enhanced religious and political tolerance, while immigrants of English backgrounds came to the region from Virginia and the Cape Fear River Basin in Eastern North Carolina.

In early English colonial times, the Albemarle area was politically part of the New Hanover Precinct, out of which the Bladen Precinct was created in 1734. The renamed Bladen County was subdivided to create Anson County in 1750, which in turn spawned Montgomery County in 1779.

Establishment of Stanly County and Albemarle 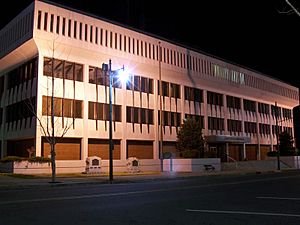 The Albemarle region's first post office was established in 1826; it was then known as Smith's Store. The nearby crossroads of the Old Turnpike Road from Fayetteville to Salisbury and the Old Stage Road connecting Charlotte and Raleigh emerged as an important hub for regional commerce and trade. The region remained part of Montgomery County until 1841, when after years of attempted separation, prominent residents of the increasingly populous areas west of the Yadkin/Pee Dee River system successfully petitioned the North Carolina General Assembly for the establishment of Stanly County as an independent entity.

Soon after the new county was formed, its Board of Commissioners was tasked with establishing a permanent county seat within eight miles (13 km) of the home of Eben Hearne (the County's first sheriff), and with laying out a new town, in which a courthouse would be erected. Nehemiah Hearne's heirs donated 51 acres (210,000 m2) from his plantation near the intersection of the Old Turnpike and Old Stage Roads for the construction of the new County Seat. The County Commissioners established the town's boundaries, laid out streets and surveyed and marked parcels of property within Hearne's donated land. The first land lot sale financed the new town's public buildings and paid some part of the elected officials' salaries. The courthouse was erected in 1842 and used for 50 years. The City of Albemarle was formally incorporated in 1857. The town was named for Albemarle County, the first county established in North Carolina, which was in turn named for the Duke of Albemarle, George Monck, one of the Lords Proprietors granted the province of Carolina in 1663 by King Charles II.

The Albemarle region's early economic growth was fueled by agriculture (with cotton as the primary crop), regional mercantile trade and a short-lived gold rush in the nearby Uwharrie Mountains, all later supplanted by textile manufacturing. The Efird Manufacturing Co. (later American and Efird Mills) opened its first mill in Albemarle in 1896, and was followed soon thereafter by the Wiscasset Mill Company, the Cannon Mill Company, the Lillian Knitting Mill and others. In 1899, Wiscassett Mills Company established Cabarrus Bank and Trust, the first bank in Albemarle. By 1910, an electrical distribution plan for the city was underway.

The Yadkin Railroad began rail service to Albermarle from Salisbury in 1891. In 1911, the Winston-Salem Southbound Railway (WSS) constructed its own line through Albemarle to support the booming textile and market, eventually driving the Yadkin Railroad into obsolescence. The WSS still provides freight service through Albemarle, but since 1933 there has been no passenger service to the city. The Old Market Street Station on the WSS line has been restored, and is now the site of a popular farmer's market. The railbed of the Yadkin Railroad has been ripped up and paved over, though a one-mile (1.6 km) segment of its route south of Albemarle now serves as a hiking trail in Rock Creek Park.

In 1923, a state contract was let to construct NC-24/27 to Charlotte, the first paved highway out of Albemarle. In 1950, Stanly County Memorial Hospital opened on land donated by Wiscassett Mills. 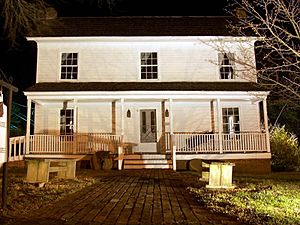 Albemarle was recognized by the National Trust for Historic Preservation as a National Main Street City in 1993. There are a number of historic preservation and adaptive reuse projects in its downtown that have been recently completed or are underway, including an initiative to create a greenway linking many of the City's parks and historic sites. The Freeman-Marks House, probably built during the 1820s, is the oldest known surviving house in Albemarle. It is listed in the National Register of Historic Places, along with the Romanesque Revival Opera House/Starnes Jewelers Building (1908) and three small historic districts in the city's downtown area. Another important historic property is the Isaiah W. "Buck" Snuggs House, an antebellum home on Third Street then owned and now named for a Stanly County sheriff who lost his leg in the Civil War Battle of Spotsylvania Court House. The Stanly County Museum in Albemarle provides a focal point for regional historic research and preservation.

The city is centered on the junction of U.S. Route 52 and the duplexed NC-24/27 in the Piedmont Region of North Carolina. Its topography is characterized by rolling, eroded hills, deciduous forests, and fast-running, narrow, shallow streams that feed the Yadkin/Pee Dee River Basin. Little Long Creek and Town Creek are the major non-seasonal streams through Albemarle; both flow generally southward into the Long and Big Bear Creek Sub-basin.

Albemarle is located in the Floyd Church Formation of the Carolina Slate Belt. Thickly bedded, axially cleaved meta-mudstone and meta-argillite are common in this formation, interbedded with meta-sandstone, meta-conglomerate and meta-volcanic rock. Biotite is the most prevalent Paleozoic metamorphic rock in the region.

Albemarle's Parks and Recreation Department was established in 1963. It currently operates and administers five parks within the city's limits, as well as a soccer complex and a ceramics facility. The newest facility under the Department's purview is City Lake, a 75-acre (300,000 m2) park on a 100-acre (0.40 km2) lake that was opened in 2003, joining Rock Creek Park, Chuck Morehead Memorial Park, Roosevelt Ingram Memorial Park and Don Montgomery Memorial Park.

Morrow Mountain State Park is a large state park located east of the city. It is situated on a high elevation in the Uwharrie Mountains adjoining the Yadkin River, and offers many recreational activities. The park features a natural history museum and the restored 19th-century home site of Dr. Francis J. Kron. 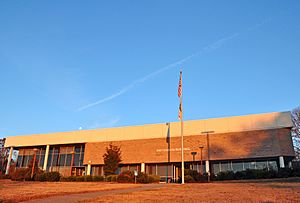 All content from Kiddle encyclopedia articles (including the article images and facts) can be freely used under Attribution-ShareAlike license, unless stated otherwise. Cite this article:
Albemarle, North Carolina Facts for Kids. Kiddle Encyclopedia.