Pickler gained fame as a contestant on the fifth season of American Idol and finished in sixth place. In 2006, she signed to 19 Recordings and BNA Records as a recording artist. Her debut album, Small Town Girl, was released later that year and has sold over 900,000 copies. The album, which was certified gold by the RIAA, produced three singles on the Billboard Hot Country Songs charts: "Red High Heels" at #15, "I Wonder" at #14, and "Things That Never Cross a Man's Mind" at #16.

In 2012, Pickler was ranked as the 14th best American Idol alumna. In October 2012, she parted ways with her former record label and signed with Black River Entertainment.

On May 21, 2013, Pickler and her partner, Derek Hough, were declared the winners of the 16th season of Dancing with the Stars. In 2016, she was inducted into the North Carolina Music Hall of Fame. 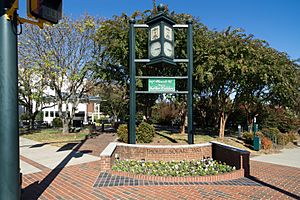 A banner proclaims Albemarle as "Home of Kellie Pickler"

Kellie Pickler was born at Stanly Memorial Hospital in Albemarle, North Carolina. Pickler says the major influences in her life are her grandfather, Clyde Raymond Pickler, Sr., a former electrician, and grandmother, Faye Pickler. Pickler graduated in 2004 from North Stanly High School in New London, North Carolina. She was a cheerleader and beauty queen. She sang "On the Side of Angels" by LeAnn Rimes at her high school graduation.

She worked as a carhop at a Sonic Drive-In franchise, and in 2005, she made an appearance on WSOC-TV's Gimme the Mike! Charlotte contest. She finished in second place. She participated in the Miss America circuit and won the "Miss Stanly County" pageant at age 17 and subsequently competed for Miss North Carolina 2004. 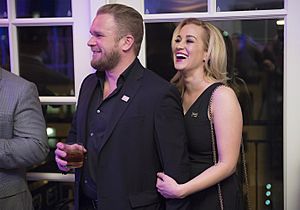 On February 26, 2007, she met her personal "idol" and strongest influence, Dolly Parton. The surprise was arranged by Sony BMG Nashville chairman Joe Galante.

In 2007, Pickler was in a relationship with Nashville Predators player Jordin Tootoo and visited his family in Nunavut. Later that year, the two broke up.

Pickler's best friend is Summer Miller, who Pickler met when they were teen pageant hopefuls, she is close friends with Carrie Underwood; Taylor Swift, who co-wrote her second single "Best Days of Your Life"; and her American Idol roommate, Katharine McPhee. 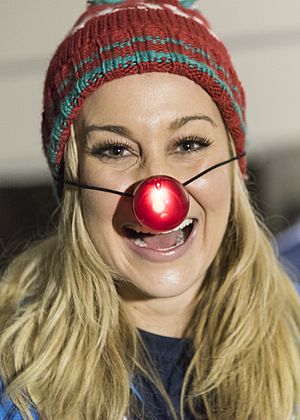 After two and a half years of dating, Pickler became engaged to songwriter Kyle Jacobs on June 15, 2010. On January 1, 2011, she and Jacobs eloped and married in a "small, intimate ceremony on a private island in the Caribbean".

On September 4, 2012, Pickler shaved her head on Good Morning America in support of her friend, Summer Holt Miller, who started chemotherapy after breast surgery.

In 2015, it was announced that Pickler and Jacobs would star in a 13-episode reality show for CMT entitled I Love Kellie Pickler. The show premiered on November 5, 2015.

All content from Kiddle encyclopedia articles (including the article images and facts) can be freely used under Attribution-ShareAlike license, unless stated otherwise. Cite this article:
Kellie Pickler Facts for Kids. Kiddle Encyclopedia.