Kelly Brianne Clarkson (born April 24, 1982) is an American singer-songwriter and television personality. She rose to fame in 2002 after winning the inaugural season of the television series American Idol, which earned her a record deal with RCA Records. Clarkson's debut single, "A Moment Like This", topped the US Billboard Hot 100 chart and became the country's best-selling single of 2002.

Clarkson has sold over 25 million albums and 45 million singles worldwide. She also scored a total of over 100 number ones on the Billboard charts. Her accolades include three Grammy Awards, three MTV Video Music Awards, four American Music Awards, and two Academy of Country Music Awards. Billboard hailed Clarkson as one of pop music's greatest singers and honored her with the Powerhouse Award for her vocals.

Known as a versatile singer, Clarkson became the first artist in history to top each of Billboard's pop, adult contemporary, adult pop, country and dance charts. She was ranked nineteenth on VH1's list of 100 Greatest Women in Music.

Clarkson has also ventured into film, television, and writing children's books. She currently serves as a coach on the television competition series The Voice and will host her self-titled variety talk show in 2019. 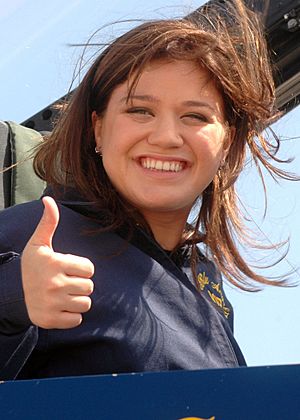 Kelly Clarkson gives thumbs up prior to her flight with the U.S. Navy's flight demonstration team, the Blue Angels

Clarkson was born in Burleson, Texas. She is the third and youngest child of Jeanne Rose, a first grade teacher, and Stephen Michael Clarkson.

Clarkson went to Pauline G Hughes Middle School and Burleson High School. She originally wanted to be a marine biologist, but changed her mind after she saw the movie Jaws. In seventh grade, one of her teachers overheard her singing in a hallway and asked her to audition for the school choir. 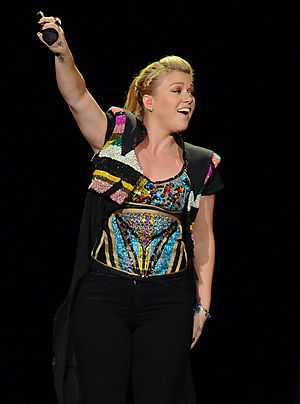 In high school, Clarkson performed in musicals. Clarkson continued singing and soon started classical training, hoping that music would be her ticket to a college scholarship.

After finishing high school, Clarkson was offered full scholarships to The University of Texas at Austin, the University of North Texas, and the Berklee College of Music. However, she decided against college to pursue a career in music.

In 2012, she began dating talent manager Brandon Blackstock, they married on October 20, 2013, at Blackberry Farm in Walland, Tennessee. Since their marriage Brandon has been her manager. Clarkson is the stepmother to Blackstock's daughter and son from his previous marriage. Together, they have a daughter born in June 2014, and a son born in April 2016. They currently reside in Encino, Los Angeles, California, as well as Hendersonville, Tennessee. 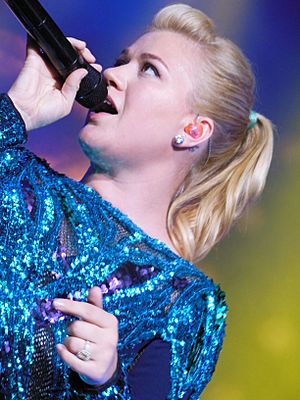 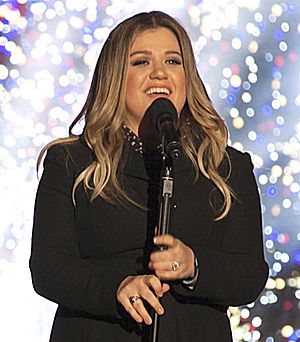 All content from Kiddle encyclopedia articles (including the article images and facts) can be freely used under Attribution-ShareAlike license, unless stated otherwise. Cite this article:
Kelly Clarkson Facts for Kids. Kiddle Encyclopedia.