Born in Hammonton, New Jersey, she grew up in Willow Grove, Pennsylvania. She married Joe Biden in 1977, becoming stepmother to Beau and Hunter, his two sons from his first marriage. Biden and her husband also have a daughter together, Ashley, born in 1981. She has a bachelor's degree and a doctoral degree from the University of Delaware, as well as master's degrees from West Chester University and Villanova University. She taught English and reading in high schools for 13 years and instructed adolescents with emotional disabilities at a psychiatric hospital.

Education and career, marriage and family 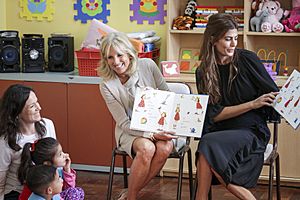 The first lady, Juliana Awada, welcomed the country to the second lady of the United States, Jill Biden, and highlighted her commitment to education and her work in defense of equal rights for women

Jacobs enrolled in a junior college in Pennsylvania to study fashion merchandising, but soon found it unsatisfying. She married Bill Stevenson, a former college football player, in February 1970. Within a couple of years he opened the Stone Balloon in Newark, Delaware, near the University of Delaware. It became one of the most successful college bars in the nation.

She enrolled at the University of Delaware, where she declared English as her major. She then took a year off from college and did some modelling work for a local agency in Wilmington.

Subsequently, she returned to college and met Senator Joe Biden as a senior at Delaware in March 1975. They met on a blind date set up by Joe's brother. Although he was nine years her senior, she was impressed by his more formal appearance and manners compared to the college men she had known, and after their first date she told her mother, "Mom, I finally met a gentleman."

Jacobs graduated with a Bachelor of Arts from the University of Delaware later in 1975. She began her career teaching high school English. Meanwhile, she was going through divorce proceedings with Stevenson; the court case ended in 1976. Around this time she spent five months working in Biden's Senate office. 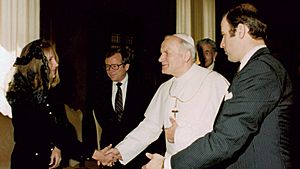 She and Joe Biden were married by a Catholic priest on June 17, 1977, at the Chapel at the United Nations in New York City. She continued to teach and then, while pregnant, received a Master of Education with a specialty in Reading from West Chester University in 1981. The Bidens' daughter Ashley Blazer was born on June 8, 1981.

She then returned to work, teaching English, acting as a reading specialist, and teaching history to emotionally disturbed students. She taught in the adolescent program at the Rockford Center psychiatric hospital for five years in the 1980s. In 1987, Biden received a second Master of Arts degree, this one in English from Villanova University.

During her husband's 1988 bid for the Presidency, she said she would continue her job of teaching emotionally disturbed children even if she became First Lady. In all, she spent 13 years teaching in public high school, including 3 years at Claymont High School. 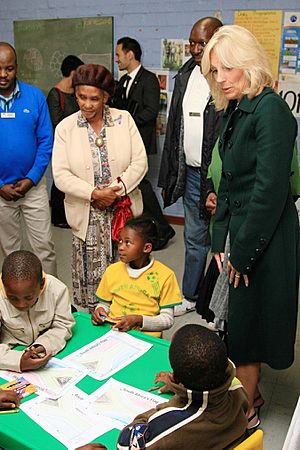 From 1993 through 2008, Biden was an instructor at the Stanton/Wilmington campus of Delaware Technical & Community College, where she taught English composition and remedial writing, with an emphasis on instilling confidence in students. She has said of teaching at a community college, "I feel like I can make a greater difference in their lives. I just love that population. It just feels really comfortable to me. I love the women who are coming back to school and getting their degrees, because they're so focused."

Biden is president of the Biden Breast Health Initiative, a nonprofit organization begun in 1993 that provides educational breast health awareness programs free of charge to schools and other groups in the state of Delaware. In the following 15 years, the organization informed more than 7,000 high school girls about proper breast health.

In 2007, Biden helped found Book Buddies, which provides books for low-income children, and has been very active in Delaware Boots on the Ground, an organization that supports military families. She runs five miles, five times a week, and she has run in the Marine Corps Marathon.

Biden later returned to school for her doctoral degree, studying under her birth name, Jill Jacobs. In January 2007, at age 55, she received a Doctor of Education in educational leadership from the University of Delaware.

First Lady of the United States 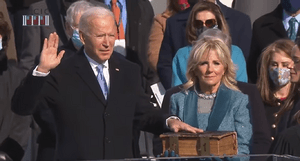 Biden alongside her husband as he takes the presidential oath of office at the 2021 Inauguration of Joe Biden.

She has reiterated that she plans to continue teaching, which would make her the first wife of a sitting US president to hold a paying job outside the White House.

In mid-November 2020, it was announced that her chief of staff as first lady would be attorney and diplomat Julissa Reynoso Pantaleon and that her senior advisor in the role would be campaign staffer Anthony Bernal.

In a January 2021 television interview, Ashley Biden confirmed that First Lady Melania Trump did not invite incoming First Lady Jill Biden to the White House for tea and a tour which previously had been a tradition in the presidential transition of power.

All content from Kiddle encyclopedia articles (including the article images and facts) can be freely used under Attribution-ShareAlike license, unless stated otherwise. Cite this article:
Jill Biden Facts for Kids. Kiddle Encyclopedia.