The area that is now Mahwah was originally formed as Hohokus Township on April 9, 1849, from portions of the former Franklin Township (now Wyckoff). While known as Hohokus Township, territory was taken to form Orvil Township (on January 1, 1886; remainder of township is now Waldwick), Allendale (November 10, 1894), Upper Saddle River (November 22, 1894), and Ramsey (March 10, 1908). On November 7, 1944, the area was incorporated by an act of the New Jersey Legislature as the Township of Mahwah, based on the results of a referendum held that day, replacing Hohokus Township. New Jersey Monthly magazine ranked Mahwah as its ninth best place to live in its 2008 rankings of the "Best Places To Live" in New Jersey.

The Lenape and ancestral indigenous peoples were the original inhabitants of Mahwah (the meeting place) and surrounding area. Their descendants have combined with other Native Americans and ethnicities and were recognized in 1980 by the state as the Ramapough Mountain Indians. They number approximately 5,000 people living around the Ramapo Mountains of northern New Jersey and southern New York. The tribe is officially recognized by New Jersey, but does not have federal recognition. Their tribal office is located on Stag Hill Road in Mahwah, and the Chief of the Ramapough Lenape Indian Nation is Dwaine Perry (as of March 2007).

The 75-room, three-story Darlington, aka the Crocker Mansion, was built in 1901 for George Crocker, son of railroad magnate Charles Crocker. The estate, located at Crocker Mansion Drive, is one of New Jersey's historical landmarks.

Ford Motor Company operated the Mahwah Assembly plant from 1955, producing 6 million cars in the 25 years it operated before the last car rolled off the line on June 20, 1980. At the time of its completion, it was the largest motor vehicle assembly plant in the United States. The Ford plant, along with other businesses such as American Brake Shoe and Foundry Company, helped contribute to the economic development of the town and its reputation for low home property taxes. The Mahwah town sports teams remain named Thunderbirds in honor of the Ford plant.

Due to contractors' dumping of hazardous wastes at the Ringwood Mines landfill site before federal regulation, it has been designated as an EPA Superfund site which needs extensive environmental cleanup. In 2006, some 600 Ramapough Indians filed a mass tort claim against Ford for damages.

Mahwah, and the closure of the Ford plant, is mentioned in the opening line of the 1982 Bruce Springsteen song "Johnny 99". 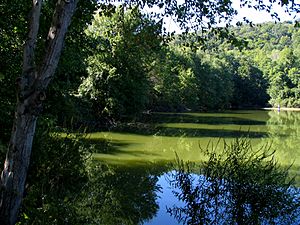 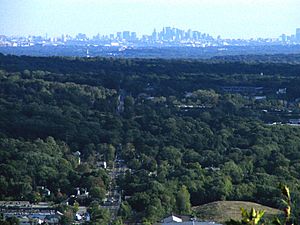 Mahwah is near the Ramapo Mountains and the Ramapo River. Interstate 287 passes through Mahwah, but the only point of access is at the New Jersey–New York border, where 287 meets Route 17. U.S. Route 202 runs through Mahwah from Oakland to Suffern, across the state line.

Several state and county parks are located in Mahwah, including Campgaw Mountain Reservation, Darlington County Park and Ramapo Valley County Reservation, all operated by Bergen County. The Ramapo River runs through the western section of Mahwah.

Campgaw Mountain Reservation is a Bergen County accredited park, covering 1,351 acres (547 ha) in Mahwah and portions of Oakland, that has campgrounds and ski slopes for skiing.

There were 9,505 households out of which 28.9% had children under the age of 18 living with them, 54.1% were married couples living together, 8.8% had a female householder with no husband present, and 34.3% were non-families. 30.1% of all households were made up of individuals, and 11.1% had someone living alone who was 65 years of age or older. The average household size was 2.42 and the average family size was 3.05. 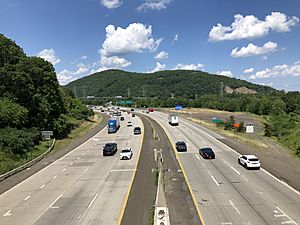 View north along I-287 and Route 17 in Mahwah, just south of the New York state line

Interstate 287 and Route 17 merge in Mahwah, and U.S. Route 202 also passes through. The northern terminus of County Route 507 is also in Mahwah. Interstate 87, the New York Thruway, is just outside the state in Suffern, New York.

Route 17 extends 2.5 miles (4.0 km) from Ramsey until it forms a concurrency where it merges with Interstate 287. County Route 507 runs 2.0 miles (3.2 km) across the northeastern portion of the township, from Ramsey to an intersection with U.S. Route 202 near the state line. 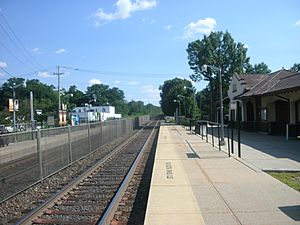 The 1913 Mahwah NJ Transit Station building is visible on the right.

NJ Transit rail service is available from the Mahwah station to Secaucus Junction, Hoboken Terminal, and Newark on the Main Line and Bergen County Line. Passengers may also take advantage of express service on the same line from the Ramsey Route 17 station located on Route 17 South and the Suffern station, just across the New York state line.

Corporate residents of Mahwah include: 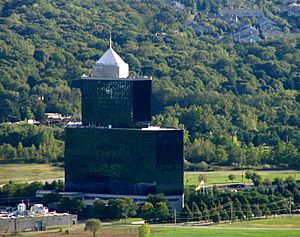 The district's newest building, Lenape Meadows, was opened in 2002 and changed the way the district divided up grade levels. Since the K-3 grades are broken up by location in the township which determines the elementary school to attend, before Lenape Meadows was built, students of that section of town attended Commodore Perry School. Commodore Perry School, Betsy Ross, and George Washington originally only housed the K-2 grades and the entire 3rd grade class attended Joyce Kilmer. The construction of Lenape Meadows added enough room for 3rd grade students as well, allowing Betsy Ross and George Washington room to house their students for 3rd grade, too.

Public school students from the township, and all of Bergen County, are eligible to attend the secondary education programs offered by the Bergen County Technical Schools, which include the Bergen County Academies in Hackensack, and the Bergen Tech campus in Teterboro or Paramus. The district offers programs on a shared-time or full-time basis, with admission based on a selective application process and tuition covered by the student's home school district.

People who were born in, residents of, or otherwise closely associated with Mahwah include:

All content from Kiddle encyclopedia articles (including the article images and facts) can be freely used under Attribution-ShareAlike license, unless stated otherwise. Cite this article:
Mahwah, New Jersey Facts for Kids. Kiddle Encyclopedia.