Ramsey was incorporated as a borough by an act of the New Jersey Legislature on March 10, 1908, from portions of Hohokus Township (whose remnants are now Mahwah Township). Additional territory was annexed from Waldwick in 1921, and portions of the borough were ceded to Saddle River in 1925.

The most noteworthy local historical site is the Old Stone House, which is, predictably, both old and stone, though its construction materials in the early 1700s also included hog's hair. It was originally a Dutch farmhouse and served as a tavern during the American War. Legend has it that Aaron Burr even slaked his thirst at this site, on his way to courting the woman who would become his wife in Ho-Ho-Kus. The structure opened as a historic site in 1960 with a riveting display of old pitchers.

Ramsey is named after Peter J. Ramsey, a 19th-century landowner who died circa 1854, who had sold the land that became the site of a railroad station called "Ramsey's" in 1848.

The borough is bordered by the Bergen County municipalities of Saddle River and Upper Saddle River on the east, Allendale on the southeast, and Mahwah on the north, west, and southwest.

There were 5,363 households out of which 36.8% had children under the age of 18 living with them, 62.2% were married couples living together, 8.1% had a female householder with no husband present, and 26.8% were non-families. 23.4% of all households were made up of individuals, and 9.2% had someone living alone who was 65 years of age or older. The average household size was 2.69 and the average family size was 3.21.

Ramsey has an old-style downtown cinema with two screens. It closed in 2013, but reopened in 2014 after a successful Kickstarter campaign raised the funds needed for updated projection systems.

The Ramsey Municipal Pool, located on East Oak Street, has a newly renovated pool and waterslides, a recreational field and pavilion, and beach volleyball and basketball courts.

Behind Ramsey High School, there are five tennis courts and a running track that are open to public use.

Behind Tisdale Elementary School, there are two softball fields that are open to the community. 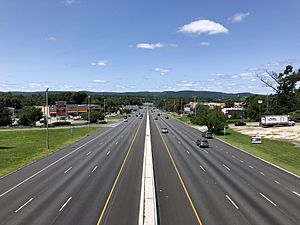 A number of roadways serve Ramsey and its neighboring communities, providing the borough with easy driving access to New York State (including New York City) and other points within New Jersey. NJ Route 17 and County Route 507 intersect the areas east and north of Ramsey's downtown business district, while Interstate 287 and U.S. Route 202 pass through the Darlington section of Mahwah to the west and the New York State Thruway (I-87/I-287) and NY Route 59 run through Suffern, New York to the north. 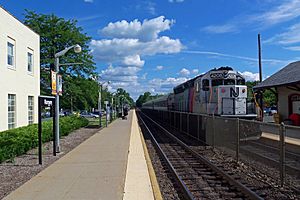 Ramsey has two NJ Transit train stations which provide mass transit access to and from Hoboken Terminal with connections available at Secaucus Junction to Penn Station New York in Midtown Manhattan and other NJ Transit lines. Located on Main Street just east of Central Avenue in the borough's downtown area, the Ramsey Main Street station was constructed in 1868 by the Paterson and Ramapo Railroad and is the oldest operating passenger station in service in New Jersey. The Ramsey Route 17 station, which opened on August 22, 2004, is a park-and-ride facility and regional commuter hub located along Route 17 South in the northern section of town. Both of these stations are stops along NJ Transit's Main Line and Bergen County Line.

Short Line provides bus service along Route 17 (with limited service at other local stops) to the Port Authority Bus Terminal in Midtown Manhattan.

Scenes from the The Happy Wanderer episode of the HBO series The Sopranos were shot at the Maple Shade Motel and scenes from the episode "Bust Out" were filmed at the Ramsey Outdoor store.

Some scenes from the 2006 film World Trade Center were filmed in a house in Ramsey.

A segment from the second episode of Rescue 911 features two residents from Ramsey who were saved from an oncoming freight train.

Corporate residents of Ramsey have included:

The most common industries for females in Ramsey, according to City-data.com, from 2008 to 2012:

The most common industries for males in Ramsey, according to City-Data.com, from 2008 to 2012:

Ramsey has a highly educated population. Based on data from the American Community Survey, it was ranked as one of the top 15 most educated municipalities in New Jersey with a population of at least 10,000, placing No. 2 on the list. With 40.3% of residents having a bachelor's degree or higher, the borough was second only to Hoboken (with 50.2%). 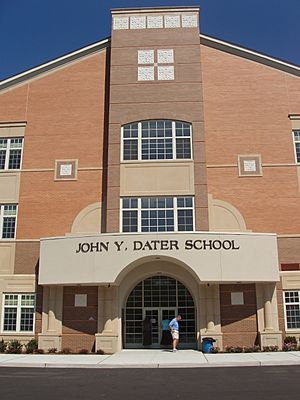 The new John Y. Dater Elementary School was built in 2006.

Students from Saddle River's Wandell School attend the district's middle school and then have the option of attending either Ramsey High School or Northern Highlands Regional High School as part of sending/receiving relationships with the Saddle River School District and each of the respective districts.

Ramsey High School was the 30th-ranked public high school in New Jersey out of 328 schools statewide in New Jersey Monthly magazine's September 2012 cover story on the state's "Top Public High Schools", after being ranked 33rd in 2010 out of 322 schools listed. The magazine ranked the school 13th in 2008 out of 316 schools.

The Roman Catholic Archdiocese of Newark oversees the operation of the Academy of St. Paul, a K-8 school and Don Bosco Preparatory High School, an all-boys Roman Catholic high school for grades 9–12 founded in 1915 and overseen by the Salesians of Don Bosco. In 2015, the Academy of St. Paul was one of 15 schools in New Jersey, and one of six private schools, recognized as a National Blue Ribbon School in the exemplary high performing category by the United States Department of Education.

People who were born in, residents of, or otherwise closely associated with Ramsey include: 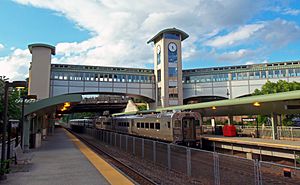 All content from Kiddle encyclopedia articles (including the article images and facts) can be freely used under Attribution-ShareAlike license, unless stated otherwise. Cite this article:
Ramsey, New Jersey Facts for Kids. Kiddle Encyclopedia.