Saddle River is a borough in Bergen County, New Jersey, United States. It is a suburb of New York City, located just over 25 miles (40 km) northwest of Manhattan. The town is known for its natural fields, farmland, forests, and rivers, and has a bucolic atmosphere, in part due in part to a minimum zoning requirement of 2 acres (0.0081 km2) for homes. The borough contains both stately historic homes and estates, as well as newer mansions. It is popular among residents seeking spacious properties in a countryside-like setting, while also having proximity to New York City.

Saddle River is one of the highest-income small municipalities in the United States and was ranked 9th in New Jersey in per capita income as of the 2010 Census. Saddle River was ranked among the Top 100 in Forbes Most Expensive Zip Codes in America in 2010. Saddle River was ranked the richest suburb in the nation among those with 2,500 or more people (based on 1989 per capita income). The town has been home to notable residents including former US Presidents, celebrities, athletes, and businessmen (See "Notable People").

The New York Times has described Saddle River as "a place where one can still keep horses - one per acre - see a deer, listen to the birds, and catch a fish in the trout stream that gives the town its name."

Saddle River is a dry town, where alcohol cannot be sold.

Saddle River was incorporated as a borough by an act of the New Jersey Legislature on November 22, 1894, from portions of Orvil Township, based on the results of a referendum held three days earlier. The borough was formed during the "Boroughitis" phenomenon then sweeping through Bergen County, in which 26 boroughs were formed in the county in 1894 alone. Saddle River's referendum passed on November 19, one day before the referendum passed for the formation of the neighboring borough of Upper Saddle River. An additional portion of Orvil Township was annexed in 1903.

The borough is named after the Saddle River, which flows through the borough and is a tributary of the Passaic River, which in turn was named for a stream and valley in Saddell, Argyll, Scotland.

Saddle River is home to the following locations on the National Register of Historic Places:

The borough is bounded by eight municipalities in Bergen County: the boroughs of Upper Saddle River, Woodcliff Lake, Hillsdale, Ho-Ho-Kus, Ramsey, Waldwick, and Allendale, and a tiny portion of Washington Township.

There were 1,216 households out of which 27.1% had children under the age of 18 living with them, 65.5% were married couples living together, 5.5% had a female householder with no husband present, and 26.5% were non-families. 23.6% of all households were made up of individuals, and 15.7% had someone living alone who was 65 years of age or older. The average household size was 2.59 and the average family size was 3.08.

Same-sex couples headed seven households in 2010, an increase from the six counted in 2000. 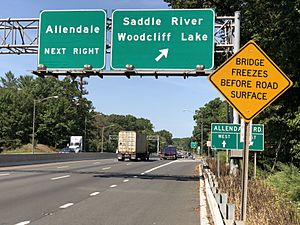 Saddle River is served mainly by Route 17, which runs directly through the borough, but certain portions are served by locations in Ho-Ho-Kus, Waldwick, Upper Saddle River, and Allendale. The Garden State Parkway is within a short distance of the borough at exit 171 in Woodcliff Lake.

The Saddle River School District, serves students in pre-kindergarten through fifth grade at Wandell School. As of the 2018–19 school year, the district, comprised of one school, had an enrollment of 165 students and 18.5 classroom teachers (on an FTE basis), for a student–teacher ratio of 8.9:1. In the 2016–17 school year, Saddle River was tied for the 28th-smallest enrollment of any school district in the state, with 150 students.

All students in 8th grade from the borough, and all of Bergen County, are eligible to attend the secondary education programs offered by the Bergen County Technical Schools, which include the Bergen County Academies in Hackensack, and the Bergen Tech campus in Teterboro or Paramus. The district offers programs on a shared-time or full-time basis, with admission based on a selective application process and tuition covered by the student's home school district.

Saddle River Day School is a K–12 private school that was founded in 1957.

People who were born in, residents of, or otherwise closely associated with Saddle River include:

All content from Kiddle encyclopedia articles (including the article images and facts) can be freely used under Attribution-ShareAlike license, unless stated otherwise. Cite this article:
Saddle River, New Jersey Facts for Kids. Kiddle Encyclopedia.