Inhabited during the pre-Columbian era by the Lenape Native American tribe, the region surrounding Waldwick was first explored by Europeans when a Dutch trading expedition landed near there in 1610. With the creation of the Nieuw Amsterdam colony in 1624, the present site of the borough became a Dutch possession along with the rest of northeastern New Jersey. During the period from 1624-1664 it was sparsely developed by Dutch settlers, mainly for agricultural purposes. With the annexation of Nieuw Amsterdam by the English in 1664 came a nearly instant increase in immigration to the region and the development of several settlements in and around the present borders of the borough.

In the mid-19th century, Waldwick and the surrounding area constituted a small settlement within Franklin Township, an area that encompassed much of northwestern Bergen County. The area's population grew significantly after the Erie Railroad established a train station. On January 1, 1886, Orvil Township was formed from portions of Hohokus Township and Washington Township. The "Boroughitis" phenomenon that swept through Bergen County, in which 26 boroughs were formed in the county in 1894 alone, hit Orvil Township particularly hard, resulting in the formation of five new boroughs created from the nascent township, including Montvale and Woodcliff (now Woodcliff Lake) on August 31, 1894, Allendale on November 10, 1894, Saddle River on November 20, 1894, and Upper Saddle River formed on November 22, 1894. On April 7, 1919, a council of citizens voted to incorporate as the borough of "Waldwick", from the remaining portions of Orvil Township. With the creation of the borough of Waldwick, Orvil Township was dissolved.

Various derivations of the borough's name have been offered, including one that "Waldwick" is Old English, from "wald" (forest) and "wick" (settlement or place). According to The History Of Bergen County written in 1900 by James M. Van Valen, the name Waldwick comes from a Saxon language word meaning "beautiful grove" though other sources show a related meaning of "village in a grove".

The borough is surrounded by the boroughs of Allendale, Saddle River, Midland Park, and Ho-Ho-Kus, by the village of Ridgewood and by the township of Wyckoff.

The Ho-Ho-Kus Brook flows through the center of town in a roughly southward direction.

There were 3,420 households out of which 37.4% had children under the age of 18 living with them, 66.1% were married couples living together, 9.1% had a female householder with no husband present, and 21.6% were non-families. 18.5% of all households were made up of individuals, and 10.0% had someone living alone who was 65 years of age or older. The average household size was 2.81 and the average family size was 3.20. 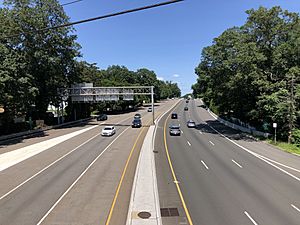 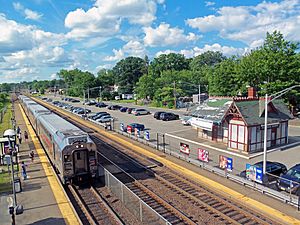 Waldwick is served by NJ Transit at the Waldwick train station, located at the intersection of West Prospect Street, Lafayette Place and Hewson Avenue. The station is served by both the Bergen County Line and Main Line, which run north–south to Hoboken Terminal with connections via the Secaucus Junction transfer station to New York Penn Station and to other NJ Transit rail service. Connections are available at the Hoboken Terminal to other NJ Transit rail lines, the PATH train at the Hoboken PATH station, New York Waterways ferry service to the World Financial Center and other destinations along with Hudson-Bergen Light Rail service.

Bus service between Waldwick and the Port Authority Bus Terminal in Midtown Manhattan is available via Short Line.

Students in pre-kindergarten through twelfth grade are educated in the Waldwick Public School District. As of the 2017–18 school year, the district, comprised of four schools, had an enrollment of 1,619 students and 147.0 classroom teachers (on an FTE basis), for a student–teacher ratio of 11.0:1. Schools in the district (with 2017-18 enrollment data from the National Center for Education Statistics) are Crescent School (353 students; in grades K-5), Julia A. Traphagen School (419; PreK-5), Waldwick Middle School (367; 6–8) and Waldwick High School (440; 9-12).

During the 2009–10 school year, Julia A. Traphagen School was awarded the Blue Ribbon School Award of Excellence by the United States Department of Education, the highest award an American school can receive. It was the only school in Bergen County that year out of ten schools honored statewide and the first Bergen County elementary school to receive the honor in six years.

In addition, Waldwick is home of the Waldwick Seventh-day Adventist School; The Village School, a Montessori school for children though 8th grade; and The Forum School, which is an alternative school established in 1954 for students who are developmentally disabled. Pre-school programs are also offered at Rainbow Corners day school, at the Methodist Church, Building Blocks Child Center at Christ Community Church (across from the high school), Building Blocks and at Saddle Acres School.

People who were born in, residents of, or otherwise closely associated with Waldwick include:

All content from Kiddle encyclopedia articles (including the article images and facts) can be freely used under Attribution-ShareAlike license, unless stated otherwise. Cite this article:
Waldwick, New Jersey Facts for Kids. Kiddle Encyclopedia.