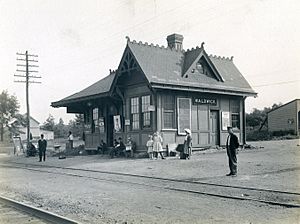 This station did not open along with the rest of the Paterson and Ramapo Railroad on October 19, 1848. The Erie Railroad, who took over that railroad, established a stop at Waldwick c. 1886. A wooden station depot was built on the east side of the tracks at that point. The historic original station house has been listed in the state and federal registers of historic places since 1984 and is part of the Operating Passenger Railroad Stations Thematic Resource. The Waldwick Community Alliance has leased the building for 25 years until 2034. After years of being in disrepair, it has been restored and now houses the Waldwick Museum of Local History.

This station has three tracks, the outer two of which are served by low-level side platforms, which are connect by a pedestrian bridge at their southern ends. As a result, the station is inaccessible for handicapped people as part of the Americans With Disabilities Act of 1990. Some weekday Bergen County Line trains originate and terminate at this station. A multiple-track yard (Waldwick Yard) is located at the north end of the station complex to house locomotives and other equipment.

All content from Kiddle encyclopedia articles (including the article images and facts) can be freely used under Attribution-ShareAlike license, unless stated otherwise. Cite this article:
Waldwick station Facts for Kids. Kiddle Encyclopedia.