The Bergen County Line (or Bergen Line) is a commuter rail line and service owned and operated by New Jersey Transit in the U.S. state of New Jersey. The line loops off the Main Line between the Meadowlands and Glen Rock, New Jersey, with trains continuing in either direction along the Main Line. It is colored on NJT system maps in pale blue, and its symbol is a cattail.

Some trains of Metro-North Railroad's Port Jervis Line also operate over the line. The Norfolk Southern Railway provides freight service along the line via trackage rights.

As on the Main Line, trains are powered by diesel locomotives operated push-pull.

From a point in Secaucus, just south of the Hackensack River bridge near the former Harmon Cove station, to a point in East Rutherford north of the Rutherford station, the Bergen County Line uses the former Erie Railroad Main Line. This portion was opened in 1833 by the Paterson and Hudson River Railroad and leased by the New York and Erie Rail Road in 1852. The rest of the line, from East Rutherford north to Glen Rock, opened in 1881 as the Bergen County Railroad.

Until the late 1950s, the main function of the Erie's Bergen County Cutoff was as a freight bypass of the at-grade Main Line through Passaic. Commuter service was relatively minor. In 1963 the Lackawanna Boonton Line up to Paterson became the new Erie Main Line. This was due to the abandonment of the Main Line section through downtown Passaic and also due to the fact that Interstate 80 construction used the old Boonton Line right-way in Paterson. The old Main Line up to Rutherford was now exclusively part of the Bergen Line. 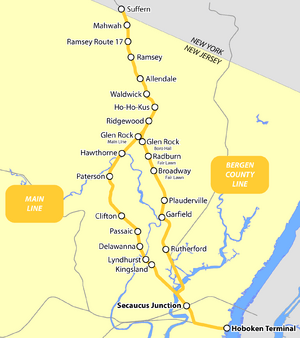 Map of the Main and Bergen County lines 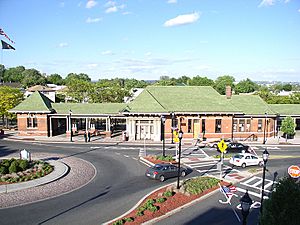 Approaching Secaucus Junction, a westbound train headed for the Bergen County Line will use the more northerly pair of tracks, designated G and H at the transfer. West of the transfer, these tracks diverge from the Main Line over a new right-of-way opened in 2003, connecting the Main Line with the Bergen County Line. During this stretch, the Hackensack River is to the left, while industrial plants on Meadowlands Parkway are to the right. A former station, Harmon Cove was located nearby along the old Erie right-of-way and opened between 1978 and 2003 to serve the high-rise apartments nearby.

Soon the train joins the old Erie Main Line right-of-way and crosses the Hackensack over HX Bridge, a two-track bascule draw. For the next two miles, the train crosses the Meadowlands, under the New Jersey Turnpike western spur with the Meadowlands Sports Complex in East Rutherford visible in the distance to the right and a new development beginning to take shape in Rutherford, to the left. Here, the track parallels Berrys Creek and eventually crosses it just before passing below Route 3.

Beyond Route 3, the landscape changes to industrial. Office buildings line the side of the track, some serviced by sidings. The Pascack Valley Line soon splits off to the right at Pascack Junction, and the train then crosses Route 17 and approaches the Rutherford station.

For a half-mile the train passes residences on either side, then swings right, abandoning the old Erie Main Line at 40°50′10″N 74°06′15″W﻿ / ﻿40.836°N 74.1042°W﻿ / 40.836; -74.1042, and passes through industrial areas with several grade crossings. Soon, the tracks form the border of Carlstadt and Wallington. Presently the train passes Wood-Ridge and South Hackensack before crossing the Saddle River into Garfield reaching the Garfield station.

The train continues northward through Garfield, passing homes, businesses, and Dahnerts Lake County Park before reaching the Plauderville station at Midland Avenue, the border between Garfield and neighboring Saddle Brook. Shortly after passing beneath U.S. Highway 46 the track becomes the border of Saddle Brook and Elmwood Park, once again crossing Midland Avenue. Interstate 80 passes above the train, which then crosses the Garden State Parkway. The Broadway station in Fair Lawn straddles a border formed by the track and Route 4.

In Fair Lawn, the line is paralleled by Plaza Road, named for Radburn Plaza, the commercial area serving the Radburn development for which the borough's more northerly station is named. The line crosses below Route 208 before reaching Radburn. Beyond the station, the train passes housing to the right and industry to the left, with a spur to a Nabisco plant. Next is the Glen Rock-Boro Hall station which like its Main Line counterpart is on Rock Road. The lines merge a short distance north of this point at Ridgewood Junction.

All content from Kiddle encyclopedia articles (including the article images and facts) can be freely used under Attribution-ShareAlike license, unless stated otherwise. Cite this article:
Bergen County Line Facts for Kids. Kiddle Encyclopedia.