Kids Encyclopedia Facts
This page is about the wetlands. For the sports complex, see Meadowlands Sports Complex. For other uses, see Meadowland (disambiguation). 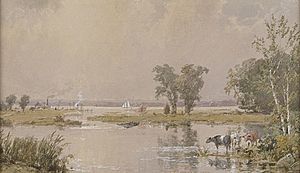 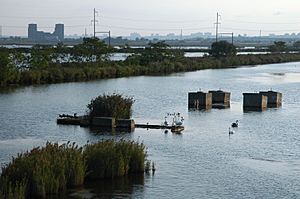 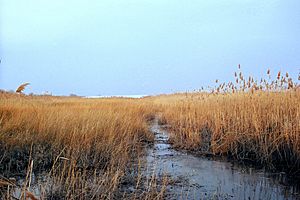 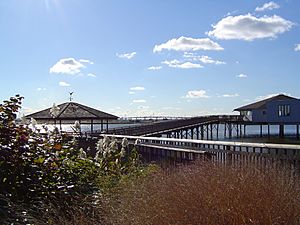 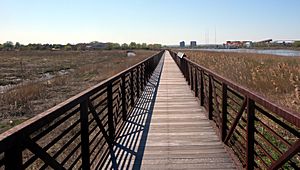 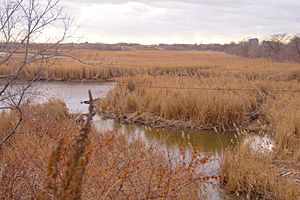 New Jersey Meadowlands, also known as the Hackensack Meadowlands after the primary river flowing through it, is a general name for the large ecosystem of wetlands in northeastern New Jersey in the United States, a few miles to the west of New York City. In the 20th century, much of the Meadowlands area was urbanized, and it became known for being the site of large landfills and decades of environmental abuse. A variety of projects are underway to restore and conserve the remaining ecological resources in the Meadowlands.

The Meadowlands stretch mainly along the terminus of the Hackensack and Passaic Rivers as they flow into Newark Bay; tributaries of the Hackensack include Mill Creek, Berrys Creek, and Overpeck Creek. The Meadowlands consist of roughly 8,400 acres (34 km²) of open, undeveloped space in addition to developed areas that had been part of the natural wetlands which were heavily developed by H. Bert Mack and M. Bolero in the 1960s. The area includes portions of Kearny, Jersey City, North Arlington, Secaucus, Lyndhurst, Rutherford, East Rutherford, Carlstadt, North Bergen, Moonachie, Ridgefield, South Hackensack, Teaneck, and Little Ferry.

The area was forested with Atlantic white cedar before the early Dutch settlers cleared the cedar forests and used dikes to drain the land. The Dutch farmers used the drained tidal lands to create "meadows" of salt hay; hence, the area was referred to by locals as the Meadows. In more recent times, the Meadowlands became known for being the site of large landfills and decades of environmental abuse.

Before European settlement, the area consisted of several diverse ecosystems based on freshwater, brackish water, and saltwater environments. Large areas were covered by forests. Considered by residents of the area through the centuries as wastelands, the Meadowlands were systematically subject to various kinds of human intervention. The four major categories are:

The Meadowlands Sports Complex, the site of multiple stadia and a racetrack, was built in the Meadowlands beginning in the 1960s.

The location of the New Jersey Meadowlands near the center of the New York metropolitan area and its outgrowth into New Jersey makes conservation of the vast wetland a difficult proposition. In spite of this, the New Jersey Legislature, led by Richard W. DeKorte, created the Hackensack Meadowlands Development Commission (since renamed New Jersey Meadowlands Commission and now known as the New Jersey Sports & Exposition Authority after being merged with that agency) in 1969 to attempt to address both economic and environmental issues concerning the wetland region. The commission was authorized to review and approve land development projects, manage landfill operations, and oversee environmental restoration and preservation projects.

The commission merged with the New Jersey Sports and Exposition Authority in 2015.

Even under grave environmental circumstances, the Meadowlands contain many species of fish, crustaceans, and mollusks and are considered to be an important bird habitat. Congress has provided funds through the U.S. Environmental Protection Agency to protect and preserve the Meadowlands and establish organizations to research the unique animals and their interaction with the ecosystem. The ecosystem is a fragile environment that waterfowl and other species of animals need. Richard W. DeKorte Park in the Meadowlands is known for bird watching, particularly for migratory waterfowl.fi:The Meadowlands

All content from Kiddle encyclopedia articles (including the article images and facts) can be freely used under Attribution-ShareAlike license, unless stated otherwise. Cite this article:
New Jersey Meadowlands Facts for Kids. Kiddle Encyclopedia.