Kearny is named after Civil War general Philip Kearny. It began as a township formed by an act of the New Jersey Legislature on April 8, 1867, from portions of Harrison Township. Portions of the township were taken on July 3, 1895, to form East Newark. Kearny was incorporated as a town on January 19, 1899, based on the results of a referendum held two days earlier. The Arlington section of town was named for Arlington Station on the Erie Railroad at the Arlington Mill plant, owned by Arlington Mills of Lawrence, Massachusetts.

The area of Kearny Township, created in 1867, had been part of the original Crown Grant of 30,000 acres (120 km2) obtained by Major William Sandford of Barbados on July 4, 1668. Major Sandford named it New Barbadoes Neck after his old home. As was the custom of the time, the Major paid 20 pounds sterling to Chief Tantaqua of the Hackensack tribe for all their reserve rights and titles.

Shortly after Schuyler's purchase of his new homestead, a peculiar green stone was uncovered. It was sent to England for analysis and he learned that it contained 80% copper. His opening of a copper mine brought the first steam engine to America from England; it was used to pump out the deep mine shaft. The engine was secretly delivered by its engineer, Josiah Hornblower. The engine and mines were destroyed by fire in 1772 and remained idle for some years.

Schuyler Mansion played a role during the American Revolutionary War Era. When Lord Howe of England took possession of New York Harbor, the proximity of Schuyler Mansion drew many of his officers. They generally traveled over a road that today is referred to as the Belleville Turnpike, which was originally constructed in 1759 using cedar logs from the nearby swamps.

During September 1777, General Henry Clinton, head of the British Expeditionary Forces in America, selected Schuyler Mansion for his headquarters during one of his more important raiding operations which included the famed Battle of Second River. The Mansion stood until 1924, a period of 214 years, when it was torn down by a land development company, despite the company's offers to transfer the land an organization that would be able to pay to maintain the property. 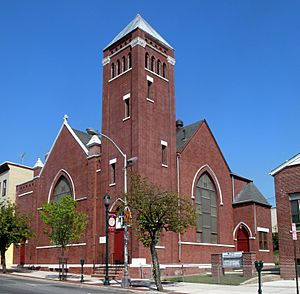 In the middle 19th century, Kearny was the upper, or northern, section of the Township of Harrison. A prominent citizen and resident of the upper section, General N. M. Halsted, felt it was impossible under these political conditions for his section to obtain proper recognition. He engaged an energetic campaign for an independent township. He succeeded when the NJ Legislature of 1867 on March 14, adopted "an act creating the Township of Kearny". The town was named to honor Major General Phil Kearny, Commander of the New Jersey Forces in the Civil War and the owner of the mansion known as Belle Grove (or Belgrove), locally called "Kearny Castle".

On April 8, 1867, the first election of town officers was held. General N. M. Halsted was elected Chairman. The first official seat of Government was three rooms in the old Lodi Hotel, on the northeast corner of Schuyler and Harrison Avenues.

In the early 1870s, Kearny erected its first Town Hall, on the corner of Kearny and Woodland Avenues, the present site of the Knox Presbyterian Church Parish Hall. This served as a Town Hall, Court House, and Schoolhouse. The Minute Book of the Township states on August 16, 1870, the first step toward establishing Kearny's present public school system was taken. The first schoolhouse was housed in the Town Hall built at Kearny and Woodland Avenues in 1873. 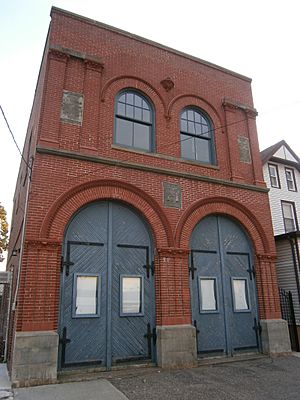 The Highland Hose No. 4 firehouse which is now on the National Register of Historic Places list was built in 1895.

The town's nickname, "Soccer Town, U.S.A." is derived from a soccer tradition that originated in the mid-1870s, when thousands of Scottish and Irish immigrants settled in the town, after two Scottish companies, Clark Thread Company and Nairn Linoleum, opened two local mills and a factory.

When the town's growth demanded larger quarters, the present Kearny Town Hall, built of Indiana limestone, was erected in 1909. 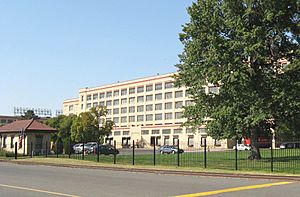 The early influx and development of industry in Kearny dates back to 1875 when the Clark Thread Company of Paisley in Scotland extended its activities to the United States by erecting two large mills in Kearny, and adding two others in 1890. These mills brought to Kearny thousands of Scots immigrants. Many of them would play on Kearny's soccer teams in National Association Football League. Many are buried at Arlington Memorial Park in the Kearny Uplands.

In 1883, the Marshall Flax Spinning Company of England erected a large plant in Kearny, known as the Linen Thread Company. Their need for experienced flax spinners brought an influx of workers from other sections of the British Isles. Families of those early textile workers were the nucleus of Kearny's present population.

The Puraline Manufacturing Company, later called the Arlington Company, which became a subsidiary of E. I. DuPont de Nemours Company, had purchased a large tract of land east of the Arlington Station on the Erie Railroad extending well out, north of the railroad embankment, into the meadowland.

In 1887, Sir Michael Nairn established the Nairn Linoleum Company of Kirkcaldy in Scotland, now the Congoleum Nairn Company of Kearny, giving further impetus to local industrial growth. This also lead to the growth in the Scottish American population which In the 1960s was about 21,000.

In 1902, the Lovell–Dressel Company, manufacturers of marine and railway lamps and fixtures, located in Kearny adjacent to the Erie Railroad.

Other industries which located in Kearny include: Swift & Company, Koppers Company, Theobald Industries, Standard Tool & Manufacturing, Wilkata Box Company, Harris Steel Company and L & R Manufacturing. Between 1926 and 1986, the Kearny Works of Western Electric employed as many as 24,000 in producing a variety of hardware and supplies for the Bell System and was the home of the "Kearny Standard" for tools and equipment, and was sold by AT&T in 1984 by which time the plant had 4,000 employees who earned a total of $128 million a year, making it one of the county's largest employers.

The HBO drama series The Sopranos was filmed partially in Kearny. One of its buildings, used for Satriale's Pork Store, was later razed to prepare for a condominium development.

Unincorporated communities, localities and place names located partially or completely within the town include Arlington, Schuylers Corner and West Arlington.

The town is bordered by East Newark, Harrison and North Arlington (which is located in Bergen County). The Passaic River separates the town from Newark and Belleville, both located in Essex County. The Hackensack River separates it from Jersey City.

The town is varied in topography and roughly divided into three parts: the Kearny Uplands, the Kearny Meadows and Kearny Point. Main thoroughfares include the eponymous Kearny Avenue (the local segment of Ridge Road / Frank E. Rodgers Boulevard), Bergen Avenue, Midland Avenue, Schuyler Avenue and Passaic Avenue. The unincorporated community of Arlington is located within the town.

A number of small parks running along Passaic River are collectively called Riverbank Park. The largest, located on the colloquial "Bunnyland Hill", is a gift from Kearny's veterans. It is named after a small zoo named Bunnyland, which was maintained by the local Kiwanis Club, that occupied part of the present Bunnyland Hill in the 20th century. During Kearny's Fourth of July celebrations (which include a fireworks display), Bunnyland Hill is the primary gathering spot for celebrants and observers. The largest park is West Hudson Park, shared with Harrison, which contains a variety of sports fields, recreational areas, and an artificial pond. The second largest recreational zone is the Kearny Playground at Gunnel Oval.

There were 13,539 households out of which 34.6% had children under the age of 18 living with them, 53.8% were married couples living together, 13.2% had a female householder with no husband present, and 27.6% were non-families. 21.8% of all households were made up of individuals and 8.8% had someone living alone who was 65 years of age or older. The average household size was 2.81 and the average family size was 3.28. 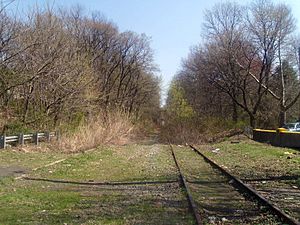 The Belleville Turnpike (Route 7) forms the northern border of the town with North Arlington and crosses the Rutgers Street Bridge over the Passaic River into Belleville. Kearny Avenue passes through the town and continues north as Ridge Road, the beginning of NJ 17. US 1/9 (Pulaski Skyway) and US 1/9 Truck pass through. The Essex Freeway (Interstate 280) passes through the town and ends at Interstate 95(W) (the New Jersey Turnpike eastern and western spurs) at the tollgate for Exit 15W.

NJ Transit offers bus service to the Port Authority Bus Terminal in Midtown Manhattan and to other New Jersey communities. Bus service to Newark is available on the 1, 30, 40, 76 and 80 routes.

Kearny was formerly served by trains of both the Erie Railroad's Newark Branch (later Erie-Lackawanna Newark Branch) and its Greenwood Lake Division (later the Erie-Lackawanna's Greenwood Lake-Boonton Line; and Conrail and New Jersey Transit's Boonton Line) which stopped at the now abandoned Arlington Station. Newark Branch service was terminated in October, 1966. New Jersey Transit discontinued Boonton Line service in 2002 when the Montclair Connection was opened. Through the early 1970s trains also stopped at a second station along this route known as West Arlington. This station was just to the east of the now abandoned WR Draw movable bridge. Prior to April 30, 1967, a station in South Kearny, was served by the Central Railroad of New Jersey's Newark and New York Railroad via the PD Draw over the Passaic River. This station was popular with employees of the giant Western Electric plant, and other industries in the area. In the final years of this service a pair of rush hour trains ran in each direction between South Kearny, and the CNJ's Broad Street Station in downtown Newark, as well as a single rush hour round trip between South Kearny, and Plainfield. This train operated via Elizabethport, and the CNJ main line.

The closest airport with scheduled passenger service is Newark Liberty International Airport, located 6.5 miles (10.5 km) away in Newark and Elizabeth.

All content from Kiddle encyclopedia articles (including the article images and facts) can be freely used under Attribution-ShareAlike license, unless stated otherwise. Cite this article:
Kearny, New Jersey Facts for Kids. Kiddle Encyclopedia.