Located within the New Jersey Meadowlands, it is the most suburban of the county's municipalities, though large parts of the town are dedicated to light manufacturing, retail, and transportation uses, as well as protected areas.

Secaucus is a derivation of the Algonquian words for "black" (seke or sukit) and "snake" (achgook), or "place of snakes", or sekakes, referring to snakes.

Settlement had begun by at least 1733 by the Smith family, whose namesake Abel I. Smith Burial Ground is part of the lore of Secaucus.

Secaucus was originally formed as a borough by an act of the New Jersey Legislature on March 12, 1900, from portions of North Bergen. On June 7, 1917, Secaucus was incorporated as a town, replacing Secaucus borough, based on the results of a referendum held on June 5, 1917.

Secaucus was originally an agricultural community specializing in flowers. It later became known for its pig farms in the first half of the 20th century. In the early 1900s the town was home to approximately 55 pig farms, which housed nearly 250,000 pigs, which outnumbered humans 16 to 1. These farms served the meat demands of Newark and New York, and made the farmers wealthy. Many of them were local politicians, most notably pork peddler Henry B. Krajewski, who ran for New Jersey senator, three times for governor and twice for U.S. President. The town's pig farms, rendering plants, and junk yards gave the town a reputation for being one of the most odorous in the New York metropolitan area. In the 1950s the pig farms began to dwindle, partially due to construction on the New Jersey Turnpike, which would carry tourists who would not appreciate the odor. In 1963, debris from the demolition of Pennsylvania Station was dumped in the Secaucus Meadowlands. In later decades Secaucus became more of a commuter town. In a non-binding referendum in 1969, 90% of voters in Secaucus chose to leave Hudson County and join Bergen County, as that county was more similar in character and had lower taxes. However, only the state has the authority to change county lines, so it never came to fruition. Today it remains the most suburban town in Hudson County.

New Jersey Monthly magazine ranked Secaucus as its 182nd best place to live in its 2010 rankings of the "Best Places To Live" in New Jersey, after ranking the borough 11th in its 2008 rankings.

At the southern end of Secaucus is Snake Hill (officially known as Laurel Hill), an igneous rock diabase intrusion jutting up some 150 feet (46 m) from the Meadowlands below, near the New Jersey Turnpike.

Being partly surrounded by the Hackensack Meadowlands, Secaucus provides opportunities to observe the recovery of natural marshes in the town's post industrial, post agricultural age. Some marsh areas in the northeast part of town have been filled to provide a new commercial area, and some to build footpaths for nature walks with signs illustrating birds and other wildlife to be seen there.

Unincorporated communities, localities and place names located partially or completely within the town include:

As its name suggests, the North End in Secaucus, New Jersey, is the section of town north of New Jersey Route 3 and the Secaucus Plaza Central Business District, to which it is connected by Paterson Plank Road. The Hackensack River and its tributary Mill Creek create the other borders for the district.

The North End is one of the older, traditional residential neighborhoods of Secaucus which itself has been transformed to a commuter town and retail and outlet shopping area in the late 20th century. It is home to Secaucus High School, whose athletic fields are used by the Bergen County Scholastic League. Nearby Schmiddt's Wood is one of the last original hardwood forests in urban North Jersey. As part of the New Jersey Meadowlands District, the areas along the river are characterized by wetlands preservation and restoration areas. Mill Creek Marsh is park administered by the New Jersey Meadowlands Commission and will eventually connect to the Secaucus Greenway. It southern counterpart is known as Riverbend. The Mill Creek Mall, also north of Route 3, but on the other side of Mill Creek close to New Jersey Turnpike Eastern Spur is part of Harmon Meadow 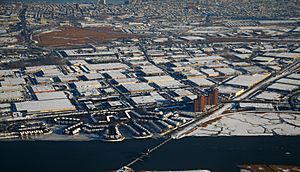 Harmon Cove is the western section of Secaucus, New Jersey along the Hackensack River, south of New Jersey Route 3. The name is portmanteau taken from Hartz Mountain, a corporation that owns much land in the New Jersey Meadowlands, which originally developed the area as a gated community in the 1970s with townhouses and highrise residential buildings. Part of the Hackensack RiverWalk Secaucus Greenway passes through the neighborhood, which is north of Anderson Marsh and Snake Hill, home to Hudson County's Laurel Hill Park.

NJ Transit maintained a Harmon Cove station from 1978 until the re-routing of the Bergen County Line and the opening of Secaucus Junction in August 2003. The HX Draw is used by the line to cross the river. NJ Transit bus 329 serves the area. The Meadowlands Hospital Medical Center and several hotels are located in Harmon Cove, whose main thoroughfare is Meadowlands Parkway, along which office and manufacturing buildings are found. The Harmon Cove Outlet Center is an outlet shopping district further inland from the Hackensack riverfront. Hartz Mountain Industries operates many facilities and properties in Harmon Cove.

About 20% of the town's employed residents commute to New York City to work. 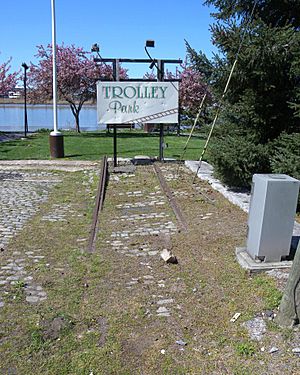 Secaucus contains a wide variety of road and rail transportation. Because of its central location, many shipping warehouses and truck freight transfer stations are located in Secaucus, both for shipping companies such as UPS and for numerous retailers. For example, Barnes & Noble's "same day delivery" service to Manhattan operates from a warehouse in Secaucus. The town also has a large rail yard and multimode terminal run by CSX and Norfolk Southern where loads are switched between trains or transferred to or from trucks.

The town is divided into four by the intersecting roads of Route 3, which runs east and west, and the eastern spur of the New Jersey Turnpike (part of Interstate 95), which runs north-south, with an interchange (16E/17) at NJ Route 3 and interchange 15X, near the Secaucus Junction station, which opened in late 2005.

Secaucus is the site of NJ Transit's Frank R. Lautenberg Secaucus Junction train station. As the station is in the south end of Secaucus, access from the rest of Secaucus is limited via County Avenue, Meadowlands Parkway or NJ Turnpike Interchange 15X. The station opened in December 2003, with a 1,100-spot parking lot that allows commuters to park and ride. Discount curbside intercity bus service is also provided outside the station by Megabus, with direct service to Boston and Philadelphia, among other locations.

Numerous NJ Transit buses serve Secaucus, including the 124, 129, 190 and 320 buses to the Port Authority Bus Terminal in Midtown Manhattan, the 78 bus to Newark, the 2 and 85 routes to Jersey City and local service provided on the 772 route. There is a bus park-and-ride at the northeast corner of Secaucus.

In the first half of the 20th century the Jersey City, Hoboken and Rutherford Electric Railway operated a trolley line through the then main business district of Secaucus, on Paterson Plank Road from Jersey City and across the Hackensack River to East Rutherford.

There are several large retail areas in Secaucus. Secaucus Plaza is the "downtown" area of Secaucus, just off of Route 3. The Outlets are a collection of outlet shops selling discounted name-brand merchandise in southwest Secaucus. Many factory retail outlets are scattered throughout the Harmon Cove industrial section, often located in warehouses or converted factories. Harmon Cove Outlet Center is the largest outlet mall, on Enterprise Avenue. The Mill Creek Mall is a mall on Route 3 on the west side of the Turnpike. Harmon Meadow Plaza is a large hotel, restaurant and shopping complex that features gyms, a pool hall, the Meadowlands Convention Center, a 14-screen Showplace Theatres and a Wal-Mart and Sam's Club located east of the New Jersey Turnpike, near Route 3 and Interchange 16E. Best Buy, Raymour & Flanigan, Ashley Furniture, Home Depot and Daffy's are located on Paterson Plank Road off Interchange 16E. National Retail Systems is another large employer. Secaucus is home to several corporate headquarters, including The Children's Place, FiberMedia, Hartz Mountain Industries and Quest Diagnostics.

Goya Foods previously had its headquarters there.

In 2011, two companies announced that they would be leaving Secaucus. The Manischewitz Company announced that it would relocate its administrative offices to Newark after being located in Secaucus for seven years. Panasonic's North American headquarters, with 250,000 square feet (23,000 m2) of offices and 500,000 square feet (46,000 m2) of warehouse space, had been located in Secaucus since 1973. After considering new locations in New York, California and Georgia, the company announced it would relocate to Newark and would receive an Urban Transit Hub Tax Credit of $102 million from the State of New Jersey for the relocation 8 miles (13 km) from its Secaucus location. The company also cited the environmental benefits possible by reducing the need of 1,000 employees to drive to work.

As of the 2014–15 NBA season, Secaucus became the official review headquarters of the NBA. All reviews of controversial calls and plays take place in the replay center. Referees consult the headquarters for guidance on the correct call. The high-tech center features over 94 HD televisions, with multiple feeds of every live NBA game.

Secaucus held a pre-Super Bowl "Winter Blast" party during the first weekend of February 2014 to celebrate Super Bowl XLVIII being played in New Jersey. The party featured a number of activities, including an ice skating rink. The town had planned for large crowds, even planning special court sessions in advance to handle the projected surge of potentially disruptive visitors. The turnout was much lower than expected, with Mayor Gonnelli citing the NFL's focus on activities in Manhattan aimed at visitors.

Students in pre-kindergarten through twelfth grade are educated by the Secaucus Public Schools. As of the 2017–18 school year, the district, comprised of four schools, had an enrollment of 2,187 students and 177.5 classroom teachers (on an FTE basis), for a student–teacher ratio of 12.3:1. Schools in the district (with 2017-18 enrollment data from the National Center for Education Statistics) are Millridge School / Early Learning Center (PreK) Clarendon Elementary School (431 students; in grades K-5), Huber Street Elementary School (631; PreK-5), Secaucus Middle School (473; 6-8) and Secaucus High School (635; 9-12). The athletic teams of Secaucus High School are nicknamed the "Patriots".

For the 2018–19 school year, the Hudson County Schools of Technology moved High Tech High School from its previous location in North Bergen to a newly built 350,000 square feet (33,000 m2) school building in Secaucus constructed at a cost of $160 million on a 22-acre (8.9 ha) site. The former building was sold to the North Bergen School District to become the new home of North Bergen High School.

People who were born in, residents of, or otherwise closely associated with Secaucus include the following:(B) denotes that the person was born there.

All content from Kiddle encyclopedia articles (including the article images and facts) can be freely used under Attribution-ShareAlike license, unless stated otherwise. Cite this article:
Secaucus, New Jersey Facts for Kids. Kiddle Encyclopedia.