North Bergen is a township in Hudson County, New Jersey, United States. As of the 2010 United States Census, the township had a total population of 60,773, reflecting an increase of 2,681 (+4.6%) from the 58,092 counted in the 2000 Census, which had in turn increased by 9,678 (+20.0%) from the 48,414 counted in the 1990 Census. The town was founded in 1843. It was much diminished in territory by a series of secessions. Situated on the Hudson Palisades, it is one of the "hilliest" municipalities in the United States. Like neighboring North Hudson communities, North Bergen is among those places in the nation with the highest population density and a majority Hispanic population.

At the time of European colonization. the area was the territory of Hackensack tribe of the Lenape Native Americans, who maintained a settlement, Espatingh, on the west side of the hills. and where a Dutch trading post was established after the Peach Tree War. In 1658, Peter Stuyvesant, then Director-General of New Netherland, repurchased from them the area now encompassed by the municipalities of Hudson County east of the Hackensack River. In 1660 he granted permission to establish the semi-autonomous colony of Bergen, with the main village located at today's Bergen Square, considered to be the first chartered municipality in what would become the state of New Jersey. At the time, the area of North Bergen was heavily forested, traversed by paths used by the indigenous and colonizing population and became known as Bergen Woods, a name recalled in today's neighborhood. After the 1664 surrender of Fort Amsterdam the entire New Netherland colony came into the possession of the British, who established the Province of New Jersey. In 1682, the East Jersey legislature formed the state's first four counties, including Bergen County, which consisted of all the land in the peninsula between the Hackensack and Hudson Rivers; that is, the eastern portions of what today is Bergen and Hudson Counties. In 1693, Bergen County was divided into two townships: Hackensack Township in the north, and Bergen Township, encompassing the Bergen Neck peninsula, in the south. The border between the two townships is the current Hudson-Bergen county line. While settlement was sparse, communities developed along the Bergen Turnpike at the Three Pigeons and Maisland, later New Durham. French botanist André Michaux developed his gardens nearby. On the Hudson River, Bulls Ferry became an important landing for crossings to Manhattan. While ostensibly under British control during the American Revolutionary War, the area was patrolled by the Americans on foraging, espionage, and raiding expeditions; most notably the Battle of Bull's Ferry.

On February 22, 1838, Jersey City was incorporated as a separate municipality, and in 1840 Hudson County, comprising the city and Bergen Township, was created from the southern portion of Bergen County. 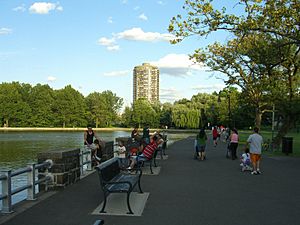 North Hudson Park and the Stonehenge

The development of Hudson County Boulevard, now known by its two sections which meet in North Hudson Park, Kennedy Boulevard and Boulevard East, was completed in the early 20th century, and by 1913 it was considered to be fine for "motoring". Residential districts along and between the boulevards were developed. Bergenline Avenue, a broad street which accommodated the North Hudson County Railway streetcars to Nungesser's became (and remains) an important commercial and transit corridor.

In 1935, in one of the most stunning upsets in boxing history, local hero James J. Braddock won the world heavyweight championship. A resident of the town until his death, the county park in North Bergen is now named for him.

Soon after the opening of the Lincoln Tunnel Approach, the Susquehanna Transfer was opened in August 1939 to accommodate passengers who wished to transfer to buses through the tunnel. At the time of its construction in 1949 the 760-foot (230 m) WOR TV Tower, in the midst the residential Woodcliff Section, was the tenth-tallest man-made structure in the world.

In the early 1960s two notable paleontological finds of fossils from the Newark Basin were made near the foot of the cliffs at one of several former quarries, the Granton, of which today's avenue is a namesake. The former quarry remained an archeological site until at least 1980.

In contrast to other Hudson County communities during the latter half of the century, North Bergen grew significantly in population. Many residents are part of the wave of Spanish language speakers which had begun in the 1960s with Cuban émigrés.

The township is roughly shaped like an inverted "L". Its northern section stretches east-west and is south of the Bergen County communities Cliffside Park, Edgewater, Fairview and Ridgefield. It shares a border with of Carlstadt in the Hackensack River. Its north-south section lies between Secaucus to the west and Guttenberg, West New York, and Union City, which with it meets Jersey City at a single point at its southern end. The Hudson River creates shared border with the borough of Manhattan in New York City.

North Bergen has diverse geological features. Partially situated on the Hudson River, the Hudson Palisades rise from the waterfront, while the northern part of the town sits atop the plateau. The cuesta, or slope, on its west side makes North Bergen the city with the second-most hills per square mile in the United States after San Francisco, some of which are extremely steep. A rock formation along the slope (located at 40°48′27″N 74°01′05″W﻿ / ﻿40.80750°N 74.01806°W﻿ / 40.80750; -74.01806) is composed of unusual serpentinite rock and made up of small rock cliffs. Because of this, it is one of the few undeveloped parts of North Bergen. Low-lying areas along the west side are part of the New Jersey Meadowlands. The unusual shape and diverse topography of North Bergen have created diverse historical and contemporary neighborhoods. 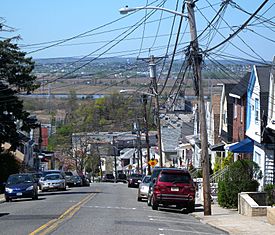 On the western slope overlooking the Meadowlands

Woodcliff Treatment Plant at the foot of the Palisades

The town has seven cemeteries, more than any other town in the county, including some, such as Weehawken Cemetery and Hoboken Cemetery, that were at one time designated for other towns. This may be due to the layout of the county in the late 19th and early 20th centuries, with North Bergen having more land than its more densely populated neighbors, which had to bury their dead outside of town. It may also date back to the Civil War era. Among these cemeteries are Flower Hill Cemetery and Grove Church Cemetery.

Route 495 travels between the Lincoln Tunnel and the New Jersey Turnpike with interchanges for Route 3 and U.S. Route 1/9, which runs north-south on the western edge side of town. 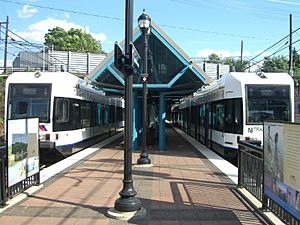 Bus service is provided along busy north-south corridors on Kennedy Boulevard, Bergenline Avenue, and Boulevard East by NJ Transit and privately operated dollar vans within Hudson County, and to Bergen and Manhattan, New York City. Nungessers is a major origination and transfer point. Lines terminating at Port Authority Bus Terminal in Midtown Manhattan are the 121, 125, 127, 128, 154, 156, 158, 159, 165, 166, 168, 320 routes. The 181 and 188 lines terminate at George Washington Bridge Bus Terminal in Upper Manhattan. Lines 22, 23, 83, 84, 85, 86, 88 and 89 terminate either at Journal Square or Hoboken Terminal. The 751 travels to Edgewater and Hackensack.

Jitney commuter buses operate along Bergenline Avenue, providing service to the Port Authority Bus Terminal, the George Washington Bridge Bus Station, the Newport Centre and other local destinations. The county's most frequent route for dollar buses, jitneys operate along Bergenline Avenue as frequently as one bus every minute, some operated by Spanish Transportation.

North Bergen is located within the New York media market, with most of its daily papers available for sale or delivery. The Jersey Journal is a local daily paper based in Jersey City. Local weeklies include the free bilingual paper, Hudson Dispatch Weekly, (named for the former daily Hudson Dispatch), North Bergen Reporter (part of the The Hudson Reporter group of local weeklies), and the Spanish language El Especialito. River View Observer is a monthly newspaper that covers the Hudson Waterfront market. Online news HudsonCountyView.com, HudsonCountyTV.com, and the HudPost.com all cover local North Bergen news.

In the late 2000s, North Bergen, Weehawken, Union City, Guttenberg, and West New York came to be dubbed collectively as "NoHu", a North Hudson haven for local performing and fine artists, many of whom are immigrants from Latin America and other countries, in part due to lower housing costs compared to those in nearby art havens such as Hoboken, Jersey City and Manhattan.

All content from Kiddle encyclopedia articles (including the article images and facts) can be freely used under Attribution-ShareAlike license, unless stated otherwise. Cite this article:
North Bergen, New Jersey Facts for Kids. Kiddle Encyclopedia.