John Owen Brennan (born September 22, 1955) is an American intelligence official who served as the Director of the Central Intelligence Agency (CIA) from March 2013 to January 2017. He served as chief counterterrorism advisor to U.S. President Barack Obama; with the title Deputy National Security Advisor for Homeland Security and Counterterrorism, and Assistant to the President. His responsibilities included overseeing plans to protect the country from terrorism and respond to natural disasters, and he met with the president daily.

Brennan's 25 years with the CIA included work as a Near East and South Asia analyst, as station chief in Saudi Arabia, and as director of the National Counterterrorism Center. After leaving government service in 2005, Brennan became CEO of The Analysis Corporation, a security consulting business, and served as chairman of the Intelligence and National Security Alliance, an association of intelligence professionals. 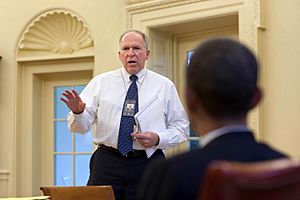 John Brennan, Assistant to the President for Homeland Security and Counterterrorism, 2010

Brennan served in the White House as Assistant to the President for Homeland Security between 2009 and 2013. Obama nominated Brennan as his next director of the CIA on January 7, 2013. Brennan was approved by the Senate Intelligence Committee on March 5, 2013, to succeed David Petraeus as the Director of the CIA.

Brennan serves as a senior national security and intelligence analyst for NBC News and MSNBC. His inaugural appearance was on Meet the Press with Chuck Todd on Sunday, February 4, 2018. He is married to Kathy Pokluda Brennan, with whom he has one son and two daughters.

Brennan is the son of Irish immigrants from Roscommon, Republic of Ireland. His father, Owen, a blacksmith, immigrated to New Jersey in 1948. Brennan was born in North Bergen, New Jersey, attended the Immaculate Heart of Mary Elementary School and graduated from Saint Joseph of the Palisades High School in West New York, New Jersey.

He received a B.A. in political science from Fordham University in 1977. He then attended the University of Texas at Austin, receiving a Master of Arts in government with a concentration in Middle East studies in 1980. He speaks Arabic fluently. His studies included a junior year abroad learning Arabic and taking courses at the American University in Cairo.

It was while riding a bus to class at Fordham, he saw an ad in The New York Times that said the CIA was recruiting. He decided that a CIA career would be a good match for his desire for public service.

All content from Kiddle encyclopedia articles (including the article images and facts) can be freely used under Attribution-ShareAlike license, unless stated otherwise. Cite this article:
John O. Brennan Facts for Kids. Kiddle Encyclopedia.