Kathleen Sebelius (born May 15, 1948) is an American businesswoman and politician who served as the 21st United States Secretary of Health and Human Services from 2009 until 2014. Previously, she was the 44th Governor of Kansas from 2003 to 2009, the second woman to hold that office. She is a member of the Democratic Party.

Sebelius was the Democratic respondent to the 2008 State of the Union address and is chair-emerita of the Democratic Governors Association (she was its first female chair). On April 10, 2014, Sebelius announced her resignation as Secretary of Health and Human Services. She is CEO of Sebelius Resources LLC. 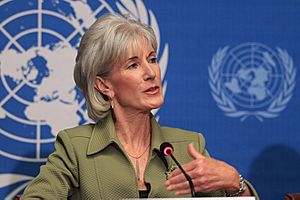 Sebelius was born and raised in Cincinnati, Ohio, the daughter of Mary Kathryn (née Dixon) and John "Jack" Gilligan. Her father is a former Democratic Ohio Governor and thus they became the first father/daughter governor duo in the United States after her election.

She attended the Summit Country Day School in Cincinnati and graduated from Trinity Washington University in Washington, D.C. with a B.A. in political science. She later earned a master of public administration degree from the University of Kansas. She moved to Kansas in 1974. Sebelius served as executive director and chief lobbyist for the Kansas Trial Lawyers Association from 1977 to 1986. 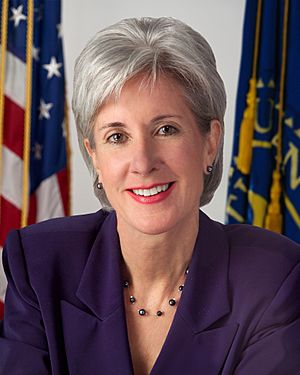 Sebelius serves as a member of the boards of directors of companies including Dermira Inc., Grand Rounds, Inc., and Humacyte Inc., and of the Estee Lauder Foundation and the Kaiser Family Foundation. In 1978, she was elected to the Common Cause National Governing Board. She serves on advisory boards for the Dole Institute of Politics and Solera Health. Sebelius is a senior advisor to Out Leadership and the Aspen Institute, where she co-chairs the Aspen Health Strategy Group. Sebelius is a frequent keynote speaker for national and international organizations. 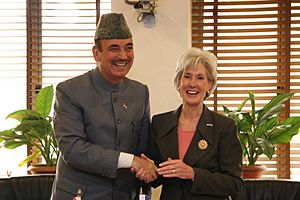 Kathleen Sebelius met with the Minister of Health and Family Welfare, during her six day visit to India

She married K. Gary Sebelius, a federal magistrate judge and the son of former Republican congressman Keith Sebelius, on December 31, 1974 in Columbus, Ohio. They have two sons. She visits her childhood and current vacation home, located in Leland, Michigan, north of Traverse City, Michigan.

An avid fan of jazz music, Sebelius has a 30-year streak of annually attending Jazz Fest in New Orleans as of 2009.

All content from Kiddle encyclopedia articles (including the article images and facts) can be freely used under Attribution-ShareAlike license, unless stated otherwise. Cite this article:
Kathleen Sebelius Facts for Kids. Kiddle Encyclopedia.