University of Kansas facts for kids

The University of Kansas is a public university in Lawrence, a hilly city in northeastern Kansas. It is often abbreviated as "KU". KU held its first classes in 1866. As of Spring 2011, over 30,000 students attended school there. 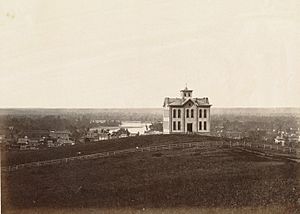 There was a plan to build a university in Kansas in 1855, but it didn't happen until Kansas became a state in 1861. The Kansas government needed to decide where to build the university. Their choices were Manhattan, Emporia, or Lawrence. On January 13, 1863, Kansas State University was built in Manhattan. The only cities left were Emporia and Lawrence. Amos A. Lawrence gave $10,000 and more than 40 acres (160,000 m2) of land for a university in Lawrence. The Kansas government liked that, so the government chose Lawrence.

On February 20, 1863, Kansas Governor Thomas Carney signed into law a bill creating the state university in Lawrence. The law was made if Lawrence gave a gift of a $15,000 endowment fund and a place for the university. The place would need to be in or near the town, of not less than forty acres (16 ha) of land.

On November 2, 1863, Governor Carney said Lawrence had met the conditions to get the state university. In 1864, the university was officially organized.

The university opened for classes on September 12, 1866, and the first class graduated in 1873.

It was named one of the best business schools in the Midwest by Princeton Review. The KU School of Business has been credited by the Association to Advance Collegiate Schools of Business (AACSB) for its undergraduate and graduate programs in business and accounting. 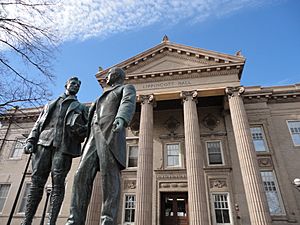 Lippincott Hall - Offices of Study Abroad and The Wilcox Museum

The University of Kansas School of Law was created in 1878. It was the top law school in the state of Kansas. The 2016 U.S. News & World Report "U.S. News Best Colleges Rankings" says that it was the 65th best law school in the United States. Classes are held in Green Hall at W 15th St and Burdick Dr, which is named after former dean James Green.

The KU Edwards Campus is in Overland Park, Kansas. It was created in 1993. It was created in order to provide adults with a chance to get college degrees and to get better education. About 2,000 students go there. The average age of the students is 31. The Edwards campus provides programs developmental psychology, public administration, social work, systems analysis, engineering management and design.

As of August 2019[update], the yearly tuition for 30 credit hours for a freshman is estimated by the university to be $10,182. This does not include room and board costs. 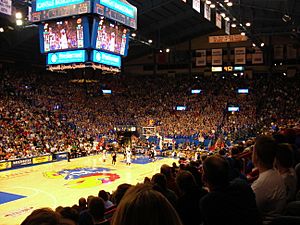 A basketball game at Allen Fieldhouse at the University of Kansas

Kansas' athletics teams are called the Jayhawks. Kansas has 16 varsity teams, all of which compete in the Big 12 Conference. They are known for their men's basketball team, which most recently won a national championship in 2008. 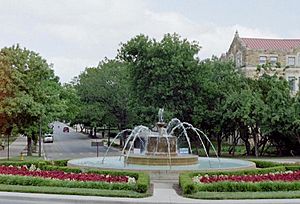 The Chi Omega Fountain at the University of Kansas 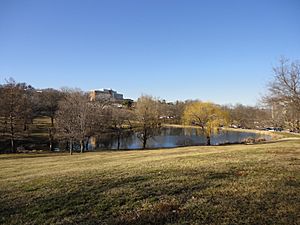 Potter Lake, with Joseph R. Pearson Hall in the background

All content from Kiddle encyclopedia articles (including the article images and facts) can be freely used under Attribution-ShareAlike license, unless stated otherwise. Cite this article:
University of Kansas Facts for Kids. Kiddle Encyclopedia.