The city traces its roots to 1905, with the arrival of its founder, William B. Strang Jr.

In early 2008, the city council voted to annex an additional 15 square miles (39 km2) south of existing city limits. The annexation was approved for an additional 8 miles (13 km) and went into effect March 10. After the annexation, the city spans nearly the entire distance between the northern and southern borders of Johnson County.

The city lies on the northern edge of the Osage Plains a few miles south of the Kansas River. One of the river's tributaries, Turkey Creek, flows northeast through the extreme northern part of the city. South of Turkey Creek, the majority of the city lies in the watershed of the Blue River. Several of the river's tributaries run east-northeast across the city; from north to south, these include Indian Creek, Tomahawk Creek, and Negro Creek. In the far southern part of the city, two more tributaries, Coffee Creek and Wolf Creek, join to form the main stem of the Blue River itself.

As a suburb of Kansas City, Overland Park is part of the Kansas City metropolitan area, and it borders other communities on all sides. These include Kansas City, Kansas, to the north, Mission and Prairie Village to the northeast, Leawood to the east, Stilwell to the south, Olathe and Lenexa to the west, and Shawnee and Merriam to the northwest. Most of Overland Park, specifically the part of it lying north of 159th Street, lies within the area of Johnson County referred to as Shawnee Mission.

There were 71,443 households of which 30.6% had children under the age of 18 living with them, 52.0% were married couples living together, 8.4% had a female householder with no husband present, 3.2% had a male householder with no wife present, and 36.3% were non-families. 29.8% of all households were made up of individuals, and 8.7% had someone living alone who was 65 years of age or older. The average household size was 2.41, and the average family size was 3.04.

Overland Park has more than 1,800 acres (7.3 km2) of park land and open space. Many of the city's 72 parks feature one or more of the following: public golf, sand volleyball, hiking and biking trails, playgrounds, tennis courts, basketball courts, and reservable shelters. 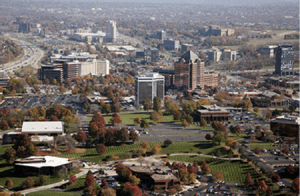 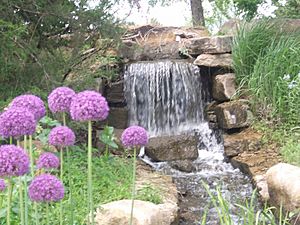 Waterfall and Flowers at the Overland Park Arboretum and Botanical Gardens.

The city is home to Overland Park Arboretum and Botanical Gardens, a 300 acres (120 ha) arboretum and botanical garden. The Oak Park Mall is one of the area's top shopping locations with nearly 200 stores. Continuing development in the Corbin Park area has added more stores and restaurants.

Scheels Overland Park Soccer Complex was named the top soccer facility in the nation by Livability because it is considered the only complex of its kind in the United States. It covers 96 acres (39 ha) and offers 12 lighted, regulation size synthetic, turf fields with a cooling system to control turf temperature on hot days.

The city is also home to Overland Park Convention Center.

In 2015, Topgolf driving range and entertainment complex opened in Overland Park. It offers a driving range, bar, and restaurant complex, and employs more than 450 people.

Historic Downtown Overland Park contains a farmers' market, the clocktower plaza and a statue of Overland Park City founder William B. Strang Jr. It also hosts the Strang Carriage House and is home to the Overland Park Historical Society.

The Nerman Museum of Contemporary Art is on the campus of Johnson County Community College.

The city has numerous public art works installed under the Public Art Program.

Overland Park is highly populated by Protestants, reflective of the overall population of the state of Kansas. Large Baptist, Methodist, Nazarene and Pentecostal churches dot the landscape of Overland Park as well as its neighboring suburbs. Overland Park is also home to a relatively small Muslim population. The Islamic Center of Johnson County serves as a mosque and a community center for Muslims in Overland Park. There is also a growing Hindu, Sikh, and Buddhist population in Overland Park and surrounding areas.

Also, Overland Park is home to a significant number of Roman Catholics. Overland Park falls within the boundaries of the Archdiocese of Kansas City in Kansas. Parishes such as St. Michael the Archangel, Holy Trinity, Holy Cross, Holy Spirit, Ascension and Queen of the Holy Rosary serve Catholics in Overland Park. Holy Cross offers a Spanish mass for the Hispanic community in the city.

The city has developed a positive reputation in American media as an affordable and family-friendly community. CNNMoney.com has consistently ranked Overland Park in the top 10 of its 100 Best Places to Live in the United States. In 2015 Forbes ranked the city among the 25 Best Suburbs for retirement. In 2015 Overland Park was named No 1 in the nation for "Top 10 Best Cities for Families". It was also recognized as No. 15 for "America's 50 Best Cities to Live " by 24/7 Wall Street. Overland Park was also awarded the No. 1 city in the country for first time home buyers in 2015 by WalletHub citing its low crime rate and outstanding schools. BusinessWeek ranked the city as one of "The Best Places to Raise Your Kids", and U.S. News & World Report ranked it among "America's 10 Best Places to Grow Up". In 2014, Housing Wire ranked Overland Park number three in its list of "The 10 absolute best housing markets for families".

Overland Park has one sister city.

All content from Kiddle encyclopedia articles (including the article images and facts) can be freely used under Attribution-ShareAlike license, unless stated otherwise. Cite this article:
Overland Park, Kansas Facts for Kids. Kiddle Encyclopedia.